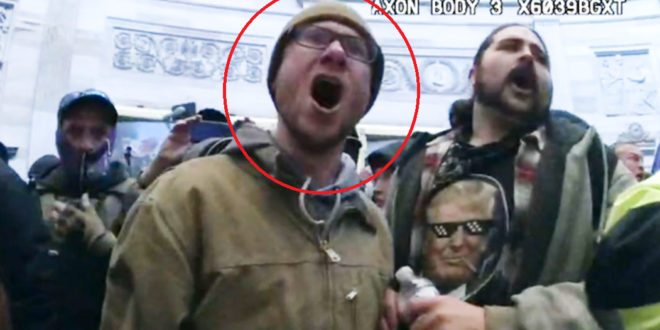 A Minnesota man who scaled a wall to get into the Capitol and threatened to return after being kicked out of the building on Jan. 6 has been sentenced to 60 days of home confinement and two years of probation.

Jordan Stotts, 32, pleaded guilty in July to a misdemeanor count of parading, demonstrating, or picketing in a Capitol Building. He had also been charged with entering and remaining in a restricted building or grounds, disorderly and disruptive conduct in a restricted building or grounds, and disorderly conduct in a Capitol building.

Stotts’ defense memorandum painted a different picture, saying that Stotts was essentially a tourist in Washington who got “caught up in the moment” and made a bad decision. Stotts’ memo also says he is unable to pay restitution due to the seasonal nature of his work.

Feds said Stotts scaled wall, raised a fist and bragged on Facebook after Jan 6 about “the siege”, writing “I’ll be back”

One video showed Jordan Stotts singing the Star-Spangled Banner while confronting officers after he and others stormed the U.S. Capitol building. https://t.co/uOngavviVb