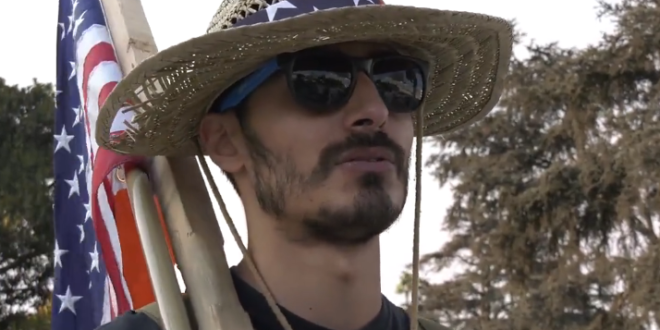 Rioter Collared After Caller Names Him On Infowars

A 26-year-old North Hills man accused of entering the U.S. Capitol building during the Jan. 6 riot in Washington D.C. was taken into custody earlier this month and is now facing federal charges.

Edward Badalian is facing a variety of federal charges, including conspiracy, obstruction, entering a restricted building and theft and destruction of government property, according to a superseding indictment filed in federal court on Nov. 17.

Badalian reportedly created a group chat on the Telegram app, called “Patriots 45 MAGA Gang,” that prosecutors allege was used as a platform to “advocate violence against certain groups and individuals” who “supported” the results of the 2020 presidential election.

In the days after the riot, Badalian appeared on the right-wing InfoWars program using the pseudonym “Turbo” to discuss video footage that allegedly showed him fighting someone he claimed to be “Antifa” who was disguised as a Trump supporter.

Later in during the call-in program, another person discussing the same video footage referred to him as “Ed” instead of “Turbo.”

As it turns out, the person who mistakenly said Badalian’s first name was salon owner Gina Bisignano, 52, who went viral for spewing homophobic slurs and other hateful rhetoric during an anti-lockdown protest in December of last year. She was also arrested for participating in the Capitol riot.

Here’s the video of Gina slipping and referring to “Turbo” as “Ed.” pic.twitter.com/EfjpZzi2Dx

[BREAKING] Ed Badalian has been indicted by a federal grand jury on *FOUR COUNTS* including a felony conspiracy charge and two felony counts of obstruction #SeditionTrack #SeditionHasConsequences https://t.co/almHAu8fWQ

Right-wing extremist Ed Badalian, who was filmed rampaging and throwing furniture inside the US Capitol on January 6th, was at the Wi Spa protest in Los Angeles on Saturday with his Proud Boys friends.

In this Oct 3rd, 2020 interview with @LAOCtv, Badalian rehashes antisemitic conspiracy theories about the media and George Soros. pic.twitter.com/eezTgj62Vg