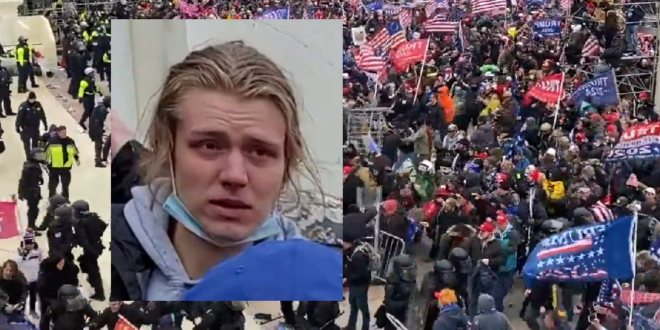 The FBI has arrested a supporter of former President Donald Trump who sprayed cops with pepper spray, smashed out a window and broke into the U.S. Capitol before he went to basic training for the U.S. Air Force.

Aiden Bilyard was arrested in Raleigh, North Carolina, according to court records. He faces a host of charges, including felony civil disorder, assaulting officers with a dangerous weapon, destruction of government property, and several misdemeanors.

The FBI relied on public Facebook posts by Bilyard’s mother that showed him wearing the same Harvard sweatshirt he wore to the Capitol to help seal the case against their Bilyard. So did online sleuths, who noted her posts about Bilyard enlisting in the U.S. Air Force.

BREAKING: A Capitol rioter who assaulted cops, smashed out a window, and then went to basic training for the U.S. Air Force has been arrested by the FBI.

It’s not included in the FBI affidavit, but here’s a photo of #HarvardSweats after he went to Air Force basic training. H/T to the #SeditionHunters community there. https://t.co/0cMneARwZM pic.twitter.com/VtNFyHhn3V

Previous Alex Jones Says He’ll Plead The Fifth Before Riot Panel: “I Don’t Want To Spend The Rest Of My Life In Prison”
Next Feds Seek Three Years For NYC Wannabe Proud Boy Who Pleaded Guilty To Death Threat Against Warnock