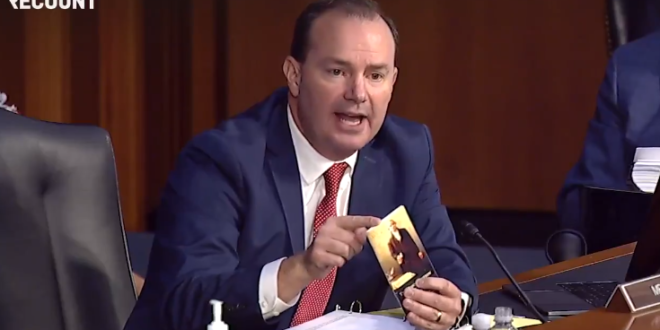 For many Utahns, the Trump rally was the breaking point. A few days before the 2020 election, Senator Mike Lee paced across a red, white, and blue stage in Goodyear, Arizona, microphone in hand, rhapsodizing about the president’s many virtues while he looked on. Lee’s talking points were mostly familiar. But then he arrived at a novel line of flattery, pitched to his coreligionists: He compared Trump to a figure from the Book of Mormon.

The backlash was swift. Members of the Church of Jesus Christ of Latter-day Saints aren’t used to seeing their sacred texts so brazenly politicized on the stump, and many members—including even some Donald Trump voters—regarded the invocation of a scriptural hero at a MAGA rally as blasphemous. Now, as he prepares to run for reelection next year, Lee is bracing for a concerted, multifront campaign to unseat him.

Read the full article. Fascinating piece. Lee is facing an independent challenge from 2016 presidential candidate Evan McMullin, who got 21% of the Utah vote that year. Lee, who is arguably the most anti-LGBT member of the Senate, recently introduced nine anti-vaccine bills.

Inside the plot to take down Mike Lee. My story on the unusual coalition in Utah working to unseat the former Trump critic turned Trump acolyte: https://t.co/TgnBteFyDN