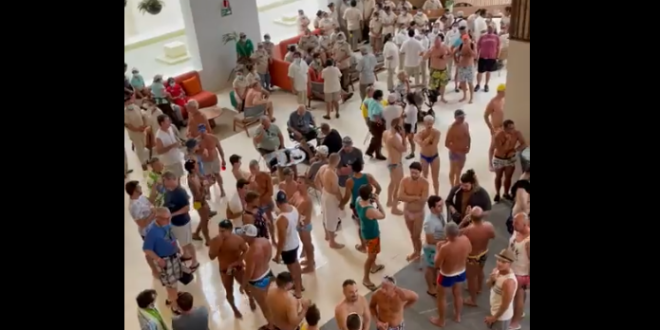 Armed men reportedly stormed a five-star resort in Cancun today as terrified Americans hid in their rooms while shots were apparently heard. Guests ran for their lives and took shelter after being told there was a “threat to the hotel” and possible shooting at the Hyatt Ziva Riviera Cancun resort in Mexico.

Andrew Krop, whose husband is a performer for the Vacaya gay vacation group, told The Sun the shooting reportedly took place shortly after 3pm local time.

“They’ve been staying at the Hyatt Ziva resort in Cancun. About a half-hour ago, he called me and said that men had stormed the beach with machine guns and started firing. “He ran with some friends and is hiding locked in a room right now,” Krop added.

Eye-witnesses claimed men had stormed the beach armed with machine guns and started firing. The US Embassy in Mexico said it is looking into reports of a shooting.

Another guest posted: “We are staying here and it seems that it was some kind of attack in the main pool, with people entering from the beach.

According to the Vacaya website, the event is sold out.

All guests and employees told to duck, and we’re all taken to hiding places at Hyatt Ziva Riviera Cancun Resort. Active shooter? Terrorist or kidnapping threat? They’re not telling us anything. pic.twitter.com/Hf7SRzRJIZ

All guests and employees taken out of hiding now and brought to lobby. Active shooter at Hyatt Ziva Riviera Cancun Resort. Still no update from hotel. People are hugging each other and crying. pic.twitter.com/AqbYms3AUb

Guests are telling me they were playing volleyball on the beach, gunman approached firing gun. Everyone ran from beach and swimming pools. Staff hustled us into hidden rooms behind the kitchens.

Guests, employees at Hyatt resort in Cancun told to hide amid reports of armed men https://t.co/ydQ0YPW97v

Previous Federal Memo: PA Drone Meant To Disrupt Power Grid
Next Federal Judge Appears Likely To Deny Trump On Riot Docs: “What Did He Know And When Did He Know It?”