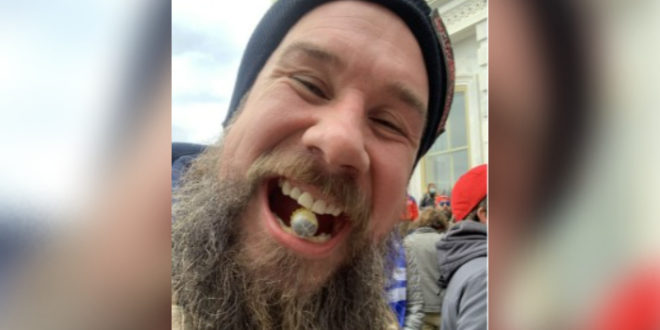 A New Jersey gym owner and former MMA fighter who punched a police officer during the January 6 riot was sentenced to 41 months in prison on Wednesday, becoming the first rioter sentenced for violence against the police during the attack. Scott Fairlamb pleaded guilty to assaulting a police officer and obstructing an official proceeding in August.

“I truly regret my actions that day. I have nothing but remorse,” Fairlamb said in court Wednesday, later adding to the judge: “I just hope you show some mercy on me sir.”

His sentence will likely set an early benchmark for how harshly rioters charged with violence may be punished and ushers in a new phase of the Capitol riot cases, which so far have only had non-violent defendants sentenced largely to no jail time.

Fairlamb spoke and teared up in court on Wednesday as he said his father was a veteran who served the United States proudly. He apologized for disgracing his family’s name and called his behavior “irresponsible” and “reckless.” He said he “takes responsibility” for what he did. He referenced health problems including cancer and a cardiac issue.

A prosecutor argued that the federal sentencing guidelines were important to follow, ahead of similar cases in the future. Fairlamb solicited donations and already has collected $30,000, the attorney said, asking the judge to impose a fine and saying it’s “not right” for the defendant to financially benefit from Jan 6.

Scott Fairlamb’s lawyer says his client no longer thinks that the election was stolen. pic.twitter.com/uM44ACdJ7o

Scott Fairlamb is set to be sentenced on Nov. 10. The government, in a sentencing memo seeking 3.5+ years in federal prison, disclosed these new images from Jan. 6, including one featuring him holding a baton and another with a pepper ball between his teeth: pic.twitter.com/TABC3ghhNy

🚨 SENTENCING: U.S. District Judge Royce C. Lamberth sentences Scott Fairlamb, of New Jersey, to 41 months in prison for obstruction and assaulting police during the #CapitolRiot, to be followed by 36 months of supervised release. @wusa9 @EricFlackTV pic.twitter.com/CzUpjLVeVr

In the days after the riot, Scott Fairlamb recorded videos referencing the QAnon conspiracy theory and making a “chilling statement,” according to the DOJ, about a coming civil war. pic.twitter.com/18F2nELbA6

This is Scott Fairlamb’s attorney, Harley Breite. There’s an actual documentary about him. https://t.co/qdddE8gqV2 pic.twitter.com/dFBgPOf0ss

Starting now: Sentencing hearing for Scott Fairlamb, a New Jersey gym owner and the first Jan. 6 defendant to plead guilty to assaulting a police officer.
Prosecutors have asked for 44 months in prison.
Fairlamb will be sentenced by Judge Royce Lamberth. pic.twitter.com/umtKJtE0X2