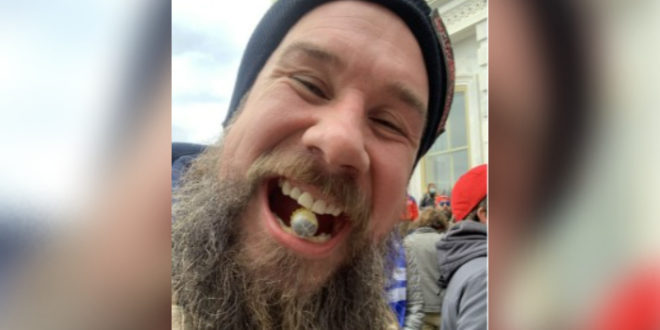 The first Capitol siege defendant to plead guilty to assaulting a police officer on Jan. 6 is appealing his case. Scott Fairlamb, the New Jersey gym owner and ex-MMA fighter who pleaded guilty in August, filed the appeal documents in federal court on Wednesday.

Fairlamb waived most of his appeal rights in his plea agreement — including the right to appeal either the conviction or the sentence. However, he didn’t waive his right to appeal based on a claim of ineffective assistance of counsel.

🚨 SENTENCING: U.S. District Judge Royce C. Lamberth sentences Scott Fairlamb, of New Jersey, to 41 months in prison for obstruction and assaulting police during the #CapitolRiot, to be followed by 36 months of supervised release. @wusa9 @EricFlackTV pic.twitter.com/CzUpjLVeVr

In the days after the riot, Scott Fairlamb recorded videos referencing the QAnon conspiracy theory and making a “chilling statement,” according to the DOJ, about a coming civil war. pic.twitter.com/18F2nELbA6

Starting now: Sentencing hearing for Scott Fairlamb, a New Jersey gym owner and the first Jan. 6 defendant to plead guilty to assaulting a police officer.
Prosecutors have asked for 44 months in prison.
Fairlamb will be sentenced by Judge Royce Lamberth. pic.twitter.com/umtKJtE0X2