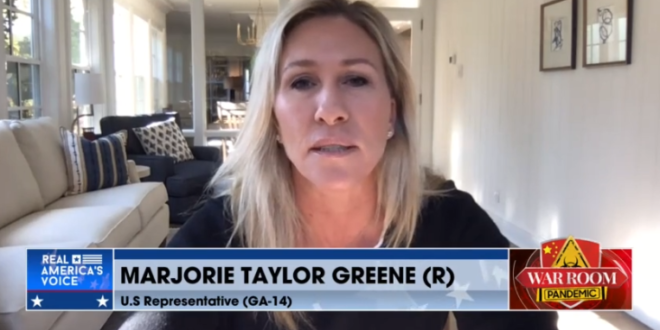 Last week, the measure – which has been significantly watered down by centrist Democrats and House Republicans over the past several months – passed along a 228-206 House vote with just 13 Republican votes, according to AP News. Immediately following the bill’s passage, Greene tarred the Republican defectors as “traitors,” tweeting all of their names and office telephone numbers.

Still reeling from the bill’s long-awaited passage, voters are flooding the thirteen Republicans’ detractors’ office lines with “menacing” messages, according to The New York Times.

Read the full article. Greene responds below. Yesterday Greene declared that the US Capitol is a “glass castle waiting to be shattered by the American people.”

1. My office, my staff, and I receive nasty calls, death threats & wishes all the time, but the difference is they are from the deranged left, not Republicans.

I get great calls from Republicans.

But all death threats should be investigated.

2. However, the calls will continue and primaries will ensue.

Republicans in the House and the Senate need to learn a lesson.

Stop helping Democrats destroy our economy, take away our freedoms, enslave us in crippling debt, and corrupt our society with immoral policies.

3. The “Infrastructure” bill was only made possible by 19 Republican Sell-Out Senators, then it was only passed because the unlucky 13 Republicans in the House voted FOR it.

6 brave Democrats voted NO, and if the traitorous 13 had voted NO the bill would have failed.

4. While the Democrat Communist Party is wielding it’s authoritarian power over the Great People of America, I will continue to lead the People to hold Republicans accountable until they figure out how to actually unite and put into action the America First words they say on TV.