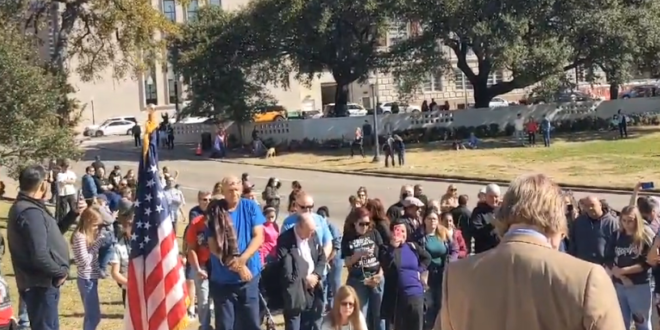 WBAP news director Eric Bushman posted some video footage of the QAnon faithful gathered in Dealey Plaza, which is the location where the late President Kennedy was shot in 1963. Among other things, one supporter drove a red QAnon truck that featured messages painted on the side that included statements such as “Trump won 2020” and “WWG1WGA,” which is the abbreviated QAnon slogan, “Where We Go One We Go All.”

At least 100 QAnon supporters convinced JFK is coming back are still in Dallas. Today they stood on a bridge over Dealey Plaza for the anniversary of the assassination, but JFK and JFK Jr. never showed. pic.twitter.com/fJTbc7p7iT

#Trump supporters demonstrating at the annual ceremony in Dealey Plaza marking the anniversary of #JFK’s death in Dallas. pic.twitter.com/DXBU55HpKJ

Moment of silence being observed at the time when JFK was shot in 1963. JFK Jr. did not reveal himself. pic.twitter.com/tNzcNaryXF