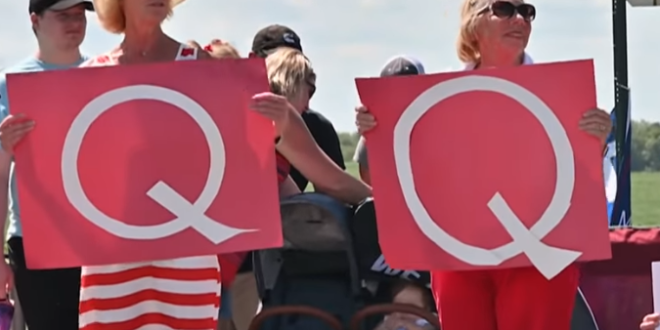 QAnon Mob Camps Out Overnight In Dallas Because JFK Jr. Will Soon Resurrect And Speak On The Grassy Knoll

QAnon supporters are gathering for an event in Texas on Tuesday at which they falsely believe JFK junior will reveal he is not dead and announce a 2024 presidential run with Donald Trump, the former president.

Pictures posted on social media appear to show scores of people outside the AT&T Discovery Plaza in downtown Dallas overnight on Monday, many of them wearing T-shirts displaying support for Mr Trump.

A bizarre theory has emerged suggesting that JFK’s plane accident was just a ruse to fake his death and that he will be resurrected. A viral video has even shown a middle-aged man that some QAnon devotees claim is JFK Jr himself.

There is currently a large crowd of what appears to be QAnon believers at the AT&T Discovery Plaza in downtown Dallas. A popular QAnon theory recently is that JFK Jr. of the Kennedy family will be making a big announcement at Dealey Plaza by the grassy knoll sometime tomorrow. pic.twitter.com/8L0Lw09wH7

Check out some of my prior coverage of the last time there was a big QAnon gathering in Dallas.

I wrote about infiltrating the For God & Country Patriot Roundup for @proteanmag.https://t.co/UE2W6q7hFr

Ah well that explains this truck I saw when I walked by there yesterday, at least https://t.co/JbqJAniDj6 pic.twitter.com/38zuqnFqC4

The JFK Jr wing of QAnon has become convinced that the Kennedy family is going to make some sort of grand reappearance in Dallas tomorrow and announce that Trump is President again. pic.twitter.com/BZhxTbvApj

As excitement builds in the JFK Jr sect of QAnon ahead of the big Dallas resurrection tomorrow night, Telegram has helpfully slapped a fake label on this John F Kennedy Jr channel to ensure followers join a channel run by the real JFK Jr back from the dead. pic.twitter.com/DKD30sGwLJ