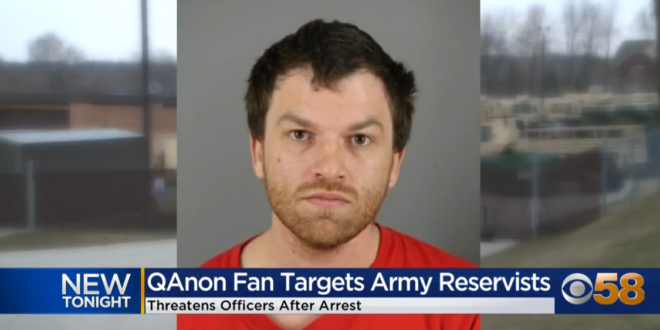 QAnon Man Gets 14 Months In Attack On Troops

Acting United States Attorney Richard G. Frohling of the Eastern District of Wisconsin announced that on November 18, 2021, Ian Alan Olson of Nashotah, Wisconsin, was sentenced to 14 months in prison, to be followed by one year of supervised release, for attacking United States Servicemen on account of their status as servicemen, in violation of 18 U.S.C. § 1389(a).

According to court records, on March 15, 2021, Olson drove his vehicle to the U.S. Army Reserve station in Pewaukee, Wisconsin. Olson’s vehicle was spray painted on all sides with words and symbols associated with the “QAnon” conspiracy theory.

Olson then got out of his vehicle, produced what appeared to be a rifle, pointed it at two uniformed U.S. Army servicemen who were in the station’s parking lot, and exclaimed, “This is for America.” Olson then fired the weapon, which turned out to be a paintball gun, directly at the two servicemen.

After Olson’s paintball gun jammed, the servicemen tackled him to the ground. Both servicemen initially believed Olson was holding a real firearm, and they feared that Olson intended to shoot and kill them.

In announcing sentence, U.S. District Judge Brett Ludwig noted the seriousness of Olson’s conduct, saying that it showed disrespect for the country, for the rule of law, and for U.S. military service personnel.

Judge Ludwig commented that any feelings of anger or frustration that Olson had about world events did not justify his unprovoked attack on the servicemen.

Federal court documents accuse Olson of telling intake staff at the Waukesha County Jail that he had just returned from Washington, where he failed to deliver his message. He allegedly said he would cause a “mass casualty” event and that people would remember his name.

“I am ready for this. How many people need to die for a message to get across,” he said, according to the complaint. Prosecutors said Olson owns armor-piercing bullets and several guns.

Ian Alan Olson was in DC ahead of March 4 — a highly anticipated date for QAnon followers. Some believers of the discredited conspiracy thought that the day would result in former President Donald Trump’s reinstatement and the beginning of “The Storm.”

The day before this failed fantasy date, Olson told a member of the National Guard that he was “maybe going to do something crazy stupid tomorrow.” Shortly after, Olson was approached by Capitol police.

He told the police officer that he wanted to “test the National Guard tomorrow to see if they were loyal to the people or to the President,” according to the complaint. Not being shot would demonstrate the National Guard’s loyalty to “the people,” Olson explained to the cop.

An armed QAnon supporter with “Q” and “WWG1WGA” painted on his car allegedly shot paintballs at soldiers and threatened to commit mass casualty event in DC. https://t.co/i0i9mEiS1w