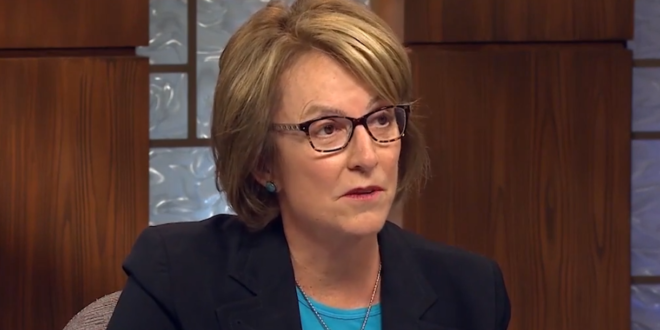 Arizona State Senator Wendy Rogers tweeted a photo of late U.S. Senator Joe McCarthy on Saturday, with text encouraging people to follow in his footsteps of getting, “rid of the communists.” Rogers has remained consistent in her messaging against communism, as earlier this year she suggested that Labor Day is a “communist holiday.” Rogers joined Senator Ted Cruz in his crusade against Big Bird for promoting vaccinations.

Rogers last appeared on JMG when she praised Confederate Gen. Robert E. Lee. Before that, she appeared her when she spearheaded a letter from over 150 GOP state reps demanding a “complete audit” of the 2020 election in every state.

Rogers first appeared on JMG when she threatened to imprison Merrick Garland. Since then she acted as conductor on QAnon cuckoo train, even claiming that COVID does not exist and that the vaccine has killed over 50,000 people.

Be more like Senator McCarthy. Get rid of the communists. pic.twitter.com/kyaLsvBP5H

Big Bird is a communist.

I love President & Melania Trump. Stop using them & the RNC to further your agenda. Stop attacking me for my faith. Stop forcing my party to say Happy Pride Month. Stay away from children with this same agenda. Everything was fine until you started pushing forced celebration. https://t.co/acV3T1GSQB

You attacked the Trumps when they honored gay conservatives.

You are an intolerant radical that needs to be defeated.