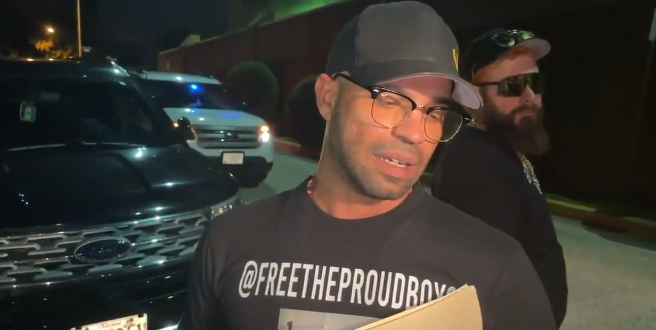 Despite graphic testimony this past Monday in which he described “horrendous” conditions inside a Washington, D.C., Department of Corrections (DOC) facility that include frequent flooding and feces in his cell and harassment by guards, Enrique “Henry” Tarrio is not coming home any time soon.

Late Friday night, Judge Jonathan H. Pittman denied Tarrio’s motion for compassionate release from the D.C. Central Detention Facility. The former leader of the far-right Proud Boys will serve the remainder of the 155-day sentence behind bars, until mid-January.

Though Tarrio described “gulag”-like conditions on the inside, Proud Boys from South Florida have turned against the former chairman and have threatened him should he return to Miami.

Read the full article. As you’ll see at the link, Miami’s Proud Boys chapter has split into two warring factions, with one lobbing threats against “snitch rat” Tarrio on their Telegram channel. Two members of the anti-Tarrio group are awaiting trial in the Capitol riot.

Is Enrique Tarrio safer in jail? 🧀🐭

“He is safer in that fucking rat cage than coming back to Miami” says current Proud Boys.

“If you don’t think like they do, they will come after you physically and violently,” say an ex-member. https://t.co/7ckHyKX931