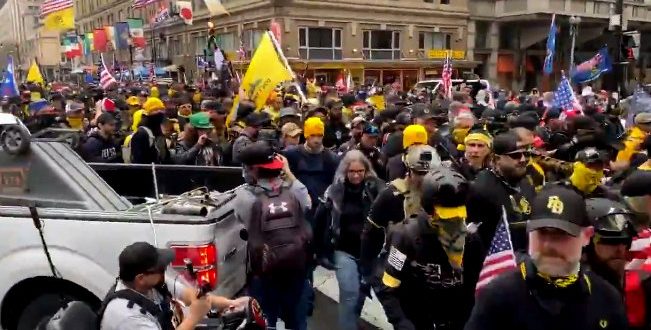 In a brief filed on behalf of accused rioter Zachary Rehl, defense attorney Jonathon Moseley claimed that the Proud Boys went to D.C. to defend “vulnerable demonstrators” from anti-fascists, akin to what Kyle Rittenhouse claimed to have done during civil unrest in August 2020 following the police shooting of Jacob Blake.

“Actually, the Proud Boys primarily came to Washington, D.C. on January 6, 2021, to patrol the perimeter of the crowds and the places where crowds were gathered to defend vulnerable demonstrators against violent attacks from ANTIFA, not unlike what Kyle Rittenhouse did in Kenosah, Wisconsin,” Moseley wrote in the brief asking for portions of the charges against Rehl to be dropped.

Read the full article. Rehl, the head of the Philadelphia Proud Boys chapter, is among those named in the federal lawsuit filed by Capitol police officers.

“NOT UNLIKE WHAT KYLE RITTENHOUSE DID”

It argues the Proud Boys came to DC on Jan 6 to “defend vulnerable demonstrators” ===> pic.twitter.com/XT4Psgx2ec

PPB’s leader and founder is Zachary Rehl, a Philadelphia resident who has a serious criminal record and a history of ties with real-life Nazis from groups like American Guard, ACT For America, Identity Europa, and the Fraternal Order of Alt-Knights. pic.twitter.com/goBV17eACx

Uhhhmmmm, hate to break it to you, bunky, but…ya kinda ARE very much like a James Bond supervillian, although u might be onto something with the “mastermind” part. #ZachRehl #ZacharyRehl pic.twitter.com/IdN5q8oAgh