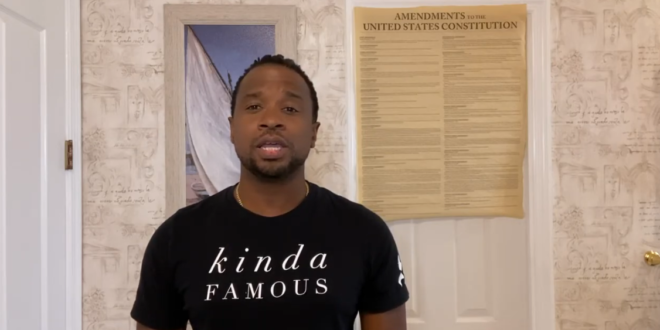 A judge is allowing a Broadway actor arrested for his alleged walk-on role in the Capitol riot to remain free on pretrial release, despite his bizarre claims to be beyond the jurisdiction of the court. At a contentious hearing held Monday, James Beeks — a Michael Jackson impersonator who starred as Judas in a traveling “Jesus Christ Superstar” company until his arrest last week — narrowly escaped being jailed after a tense exchange with Chief Judge Beryl Howell.

“I am an American standing under public law and I am here by special divine appearance,” Beeks told Howell. “I cannot represent myself because I am myself,” he said. “I reserve all rights at all times and waive none, ever.” Howell snapped back at Beeks, declaring his statements unintelligible. “That’s all gobbledygook. I have no idea what you’re saying,” the judge said.

ARRESTED: Alleged Oath Keeper affiliate James Beeks (FL) was arrested today + charged as part of the Oath Keeper “stack” that investigators say was organized to enter the Capitol during the Jan 6 riot.

Docs say he approached the group, said he was an Oath Keeper,+ asked to join. pic.twitter.com/VJPrSDkcQH

James D. Beeks, who played Judas on the U.S. tour of Jesus Christ Superstar, has been arrested on charges related to breaching the Capitol in the January 6 attack.https://t.co/6m0F8rP3hN

HAPPENING NOW: Oath Keeper James BEEKS is appearing for a hearing and immedaitely objects to being represented by a lawyer, claims he’s there in his “divine” authority as an American citizen

Judge Howell is not pleased with his “gobbledygook.”https://t.co/WmeG04ars4

Broadway actor arrested for the Insurrection at the Capitol has been suspended from playing Judas in ‘Jesus Christ Superstar’. James Beeks, 49, was charged with obstruction of Congress, which is a felony, and unlawfully entering a restricted building. pic.twitter.com/VDtqRUQgOA