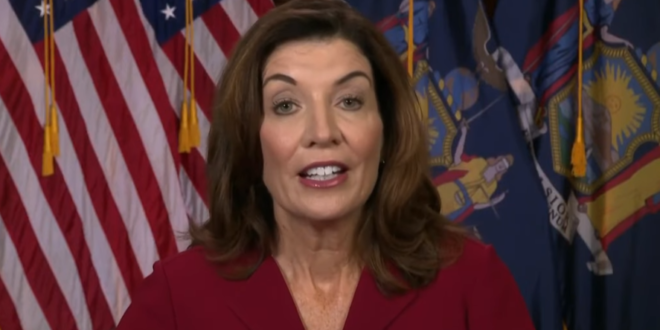 NY Gov Calls For NYC Workers To Return To The Office

Gov. Kathy Hochul is calling on people who work in New York City to come back to the office. She says she wants to see employees return early in the new year to bolster the local economy. “How about this New Year’s resolution? That in the days after New Year’s that we say, everybody back in the office,” the governor said Thursday.

“You can have a flex time, but we need you back at least the majority of the week. Come on back New Yorkers. We miss you.”

Getting the 3.1 million people who worked in Manhattan pre-pandemic back to the office will be a challenge. A recent study by the Partnership for New York City predicted only 49% of office workers will be back at their desks by the end of January. The study also found one-third of companies expect to reduce NYC office space needs in the next five years.

Read the full article. Judging by the replies and the ratio, her call did not go over very well.

Gov. Hochul makes New Year’s resolution: Bring workers back to the office. The governor asked business leaders to join her in sparking a return to in-person work during a breakfast in Midtown https://t.co/dhGqa4EMtw pic.twitter.com/rrybEHxH8p

Gov. Hochul tells businesses and commuters to resolve in 2022 to return to Manhattan workspaces

“How about this New Year’s resolution? [After New Year’s, say] ‘Everybody back in the office,’” Hochul urged, for most days of the week.https://t.co/NyOPgnlYqA

Offices are still too empty and too many workers are at home – that has an impact on our economy and ripples across the entire city.

I’m putting a stake in the ground: It’s time to get back to the office. 2/