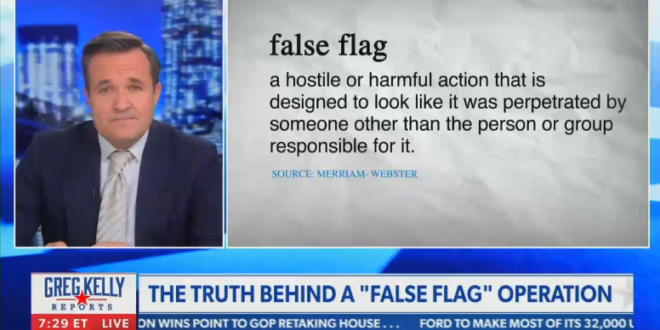 “Do you know what a false flag operation is? I actually had to look it up and it’s this – a hostile or harmful action that is designed to look like it was perpetrated by someone other than the person or group responsible for it.

“And then you go after him because you say they’re responsible for it. Lot of folks out there are starting to connect the dots, and they’re saying January 6 may have been a false flag operation.

“We’ve seen the video tapes, individuals that the FBI seems not interested in finding out anything about. People we saw agitating. Who are they? Where did they come from?

“These are legitimate questions, and they can dismiss it as a conspiracy theory as they do anything they don’t like. It’s a mistake.

“By the way, video from January 6th does show this – peaceful protesters gathered and then the police throw a stun grenade into the middle of the crowd.” – Newsmax host Greg Kelly, parroting Tucker Carlson.