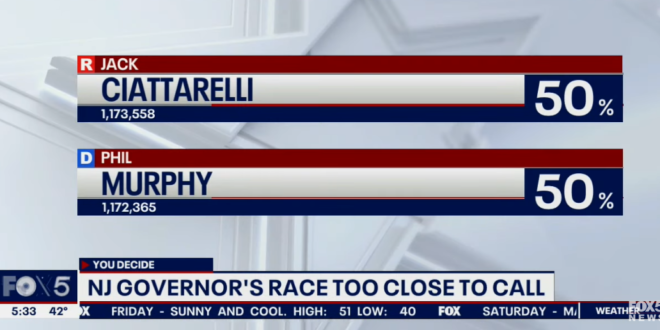 New Jersey Democratic Gov. Phil Murphy and Republican Jack Ciattarelli were virtually deadlocked early Wednesday after a campaign centered on the incumbent’s progressive policies and handling of the pandemic.

Murphy had been leading in the polls, has a 1 million-voter registration advantage and had more cash in his campaign coffers than Ciattarelli in the final days of the race. But the Republican has far surpassed the Republican nominee from four years ago in fundraising and has seen the gap in public polls move in his favor — if only by a few points.

While a Ciattarelli win would send a jolt through state and national politics, a win by Murphy would also break some historical trends. No Democrat has won reelection as governor in New Jersey since Brendan Byrne in 1977, and the party opposite the president’s has won the New Jersey governorship going back to 1985.

Ciattarelli leads Murphy by 1,193 votes as of 4am Wed with 98% reporting, per AP. pic.twitter.com/Csa5HoDTc0