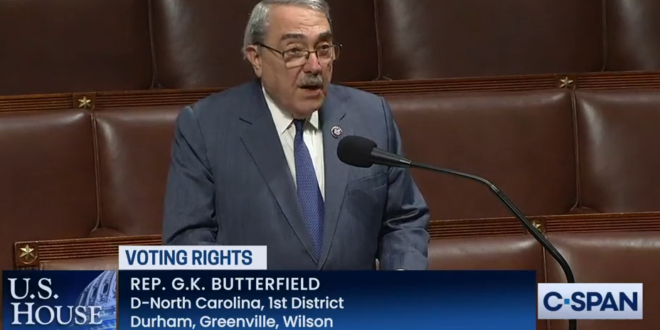 NC Dem Rep To Retire Due To Gerrymandered District

Rep. G.K. Butterfield (D-N.C.), a longtime leader of the Congressional Black Caucus, won’t seek reelection next year — another blow to Democrats’ efforts to keep control of the House after the midterm elections.

Butterfield, first elected to an Eastern North Carolina congressional seat in 2004, saw his district undergo significant changes in redistricting. Under its current configuration, now-President Joe Biden won by about 9 points there last year, as Butterfield won reelection by a similar margin — the closest of his electoral career.

Democrats are suing over the new map, arguing that it dilutes the influence of Black voters in his district, which is currently divided roughly evenly between white people and Black people.

You can see how Butterfield’s district was gerrymandered to make it harder for Democrats to win: https://t.co/FXlWoqpqGB

CBS News confirms G.K. Butterfield will retire and become the 15th House Democrat to either retire or run for another office (h/t @edokeefe)

His NC district turned into one that leans Democratic by a point due after GOP-led redistricting. He won by 9 pts in 2020.

The great irony of this is that Butterfield was one of the members most actively involved in & leading the charge on restoring the VRA & passing stronger protections against racial gerrymandering of the exact kind that NC Republicans just did to his very own seat https://t.co/LoVaDxtF0h