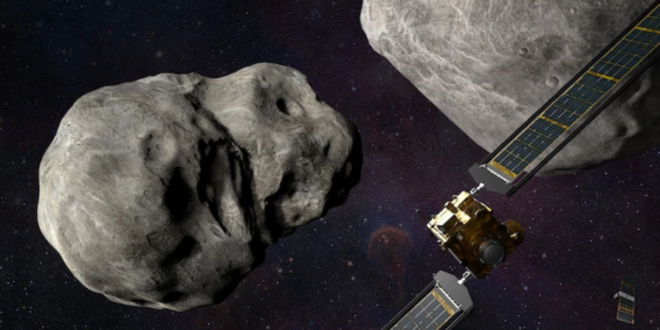 SpaceX is set to launch a NASA spacecraft on a mission to learn how to change the course of an asteroid in deep space. The mission — called the Double Asteroid Redirection Test (DART) — will test the technology needed to redirect a dangerous asteroid if one is ever found on course with Earth.

Once in space, DART will make its way to a tiny asteroid called a “moonlet” named Dimorphos that orbits the larger asteroid Didymos. DART, which will weigh about 1,345 pounds at launch, will slam into Dimorphos in the fall of 2022 to see if it can shift the course of the moonlet.

“The right time to deflect an asteroid is as far away from the Earth as we can,” Lindley Johnson, planetary defense officer for NASA, said during a news conference.

The mission’s aim is to change the course of Dimorphos through what’s called a kinetic impact, with DART ramming its target at speeds of about 14,760 mph (23,760 kph), several times the speed of a high-powered rifle bullet.

NASA will use ground-based telescopes to monitor the asteroids before and after the collision to see how much the impact changes the orbit of Dimorphos around Didymos.

Although neither Didymos nor Dimorphos pose a danger to Earth, a rock as large as Dimorphos would, “if it hit the Earth, be capable of devastating a region the size of a small state,” Cheng said. “It’s a good thing that DART will test the kinetic impactor approach before any specific asteroid impact threat has been discovered.”

SpaceX will launch NASA’s DART mission to crash into an asteroid soon and you can watch it live https://t.co/mUStJHy7ji pic.twitter.com/wAv3y6L7Zx

Today at 7 p.m. EST NASA TV will be holding a prelaunch news conference for the Double Asteroid Redirection Test (DART) mission. Tune in as #DARTMission leaders share the details of the upcoming launch to test asteroid deflection technology. https://t.co/dGOObvyXe3 pic.twitter.com/U2o1mmtxbS

Previous NYC Pastor: “The Best Person To Rape Is Your Wife”
Next DOJ Reaches $127M Settlement With Parkland Families