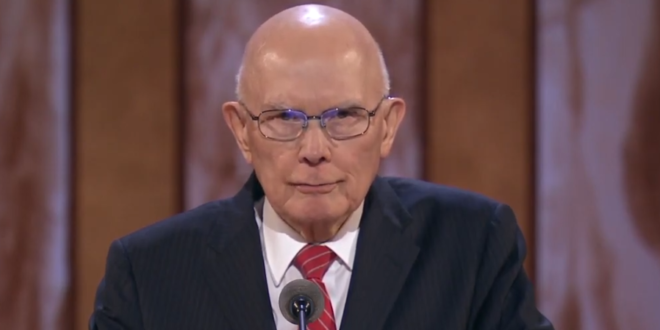 In a landmark speech Friday at the University of Virginia, Latter-day Saint apostle Dallin H. Oaks said he had recently “come to understand better the distress of persons” — including LGBTQ individuals — who feel that some religious believers invoke the U.S. Constitution to deny rights to others. The address was hailed by some as a step toward empathy by Oaks, a top leader in The Church of Jesus Christ of Latter-day Saints, a former Utah Supreme Court justice and a former Brigham Young University president.

Yet, during a question-and-answer session earlier that day at the law school — a video of which has been circulating on social media — the first counselor in the faith’s governing First Presidency refused to discuss the impact of the church’s past mistreatment of its LGBTQ members. Oaks categorically denied that BYU had used electroshock therapies on gay students during his tenure from 1971 to 1980.

As president of Brigham Young University from 1971 to 1980, Oaks was outspoken regarding the role of homosexuality in the Church of the Latter-day Saints. In a 2019 speech at BYU Hawaii, he referenced “lesbian, gay, and transgender lifestyles and values” as an example of “a culture of evil and personal wickedness in the world.” Oaks’ presidency also condoned electric shock therapy studies, such as a 1976 study led by the psychology department.

In a Church of Latter-day Saints public affairs discussion, Oaks expressed his belief that homosexuality ruins heterosexual family structures and causes “loss of eternal opportunities.” “There is no such thing in the Lord’s eyes as something called same-gender marriage,” Oaks said in the discussion. “Homosexual behavior is and will always remain before the Lord an abominable sin. Calling it something else by virtue of some political definition does not change that reality.”

A reminder that just two years ago the next Mormon prophet, Dallin Oaks, told *students at BYU Hawaii* that one of the ‘great evils’ in the world is the LGBT lifestyle.

Keep that in mind as the LDS church tries to soften their rhetoric when they’re around non-Mormon audiences. pic.twitter.com/nosakYjAw1

That is such a huge thing to “forget.”I think so much of the LDS Church would be better off if they just owned up to this stuff and apologized for it. It happened, you can’t deny it. Apologize, stop doing it and be better https://t.co/wMNvyxlgmO