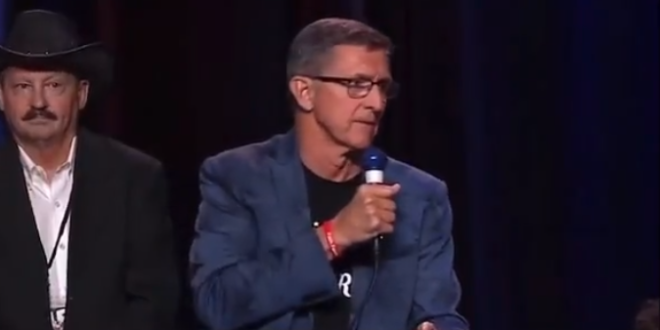 Michael Flynn: The US Can Only Have “One Religion”

In his latest journey to the edge of extreme, Donald Trump’s former National Security Adviser and felon Michael Flynn called on Saturday for a single religion in America.

Such a vision is completely contrary to the Constitution’s guarantee of Freedom of Religion, and the separation of church and state.

Read the full article. US Senate candidate Josh Mandel, it must be noted, is Jewish. Surely he knows what would happen in Michael Flynn’s dream scenario. Flynn is trending at #1 on Twitter at this writing. The clip below already has 3.5 million views.

We stand with General Flynn.

I can not fucking wait to see Michael Flynn get arrested.

Every time a guy like Michael Flynn says something maniacal like he did today, I want to ask every Republican voter with any decency,
“Look, I know you want your party in power and all but at some point, doesn’t it bother you that you’re empowering traitorous, racist monsters?”

What kind of fucked up party thinks Kyle Rittenhouse, Michael Flynn, and Ashli Babbitt are heroes?

Previous CHATTER AWAY: Overnight Open Thread
Next Anti-Vax GOP State Rep Begs For Medication Because He’s Stranded In El Salvador And Sick With Something