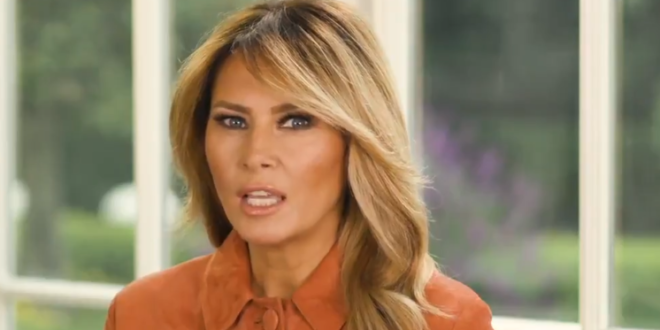 Former first lady Melania Trump, the recipient of Log Cabin’s 2021 Spirit of Lincoln award, was announced in September as the featured guest at the event. Log Cabin Republicans endorsed Trump in the 2020 election, despite criticism of the Trump administration for his anti-LGBTQ actions, such as the transgender military ban and administrative rollbacks of LGBTQ protections in the name of religious freedom. In 2016, when Trump won the presidential election against Hillary Clinton, Log Cabin opted not to endorse him.

Melania Trump, accompanied by escort, receiving the 2021 ‘Spirit of Lincoln Award’ from the Log Cabin Republicans last night for her tireless devotion to promoting diversity, equality and equal justice under the law for everyone all over the world. pic.twitter.com/SOotALCUeH

Today @LogCabinGOP honors and celebrates @MELANIATRUMP with the Spirit of Lincoln Award for her commitment to enhancing personal freedom, encouraging individual responsibility, and ensuring equality under the law for all Americans.

Absolutely EPIC crowd at the @LogCabinGOP event welcoming @MELANIATRUMP to the #SpiritOfLincoln event for her keynote address! pic.twitter.com/Cr5jUWuwyu

President Trump comes by the donor lunch for the @LogCabinGOP weekend at Mar a Lago.

Tonight, @MELANIATRUMP is honored by gay conservatives for her incredible work to be @GetOutspokenUSA about real equality.

The event is completely sold out. We’ve had to turn people away. pic.twitter.com/5mvECLu1zb

Awesome job at the Spirit of Lincoln Gala by @rww_gop accepting the Majority Maker Award on behalf of @GOPChairwoman. We look forward to working with the @LogCabinGOP as we launch our Pride Coalition at the @GOP. #LeadRight pic.twitter.com/jwRORkNhER

Former Acting Director of National Intelligence @RichardGrenell accepted the “Game Changer” award from his former boss, Pres. Donald Trump, in front of over 600 guests at the Mar-a-Lago Club Saturday, at the Log Cabin Republicans’ “Spirit of Lincoln” gala. https://t.co/Fs9VIh3T2s pic.twitter.com/fwqbMpza51

You know that award The Log Cabin Republicans gave Melania Trump? You can have one too!https://t.co/CyhCyodv3b

Last night, Log Cabin Republicans presented First Lady @MELANIATRUMP with our annual Spirit of Lincoln Award at Mar-a-Lago for her dedication to our principles.

Watch LGBT conservatives explain why the First Lady is a champion and inspiration to our community.

Previous Christie Begs Cultists To Give Up On 2020: “It’s Over”
Next Loser Rages That Infrastructure Week Finally Happened