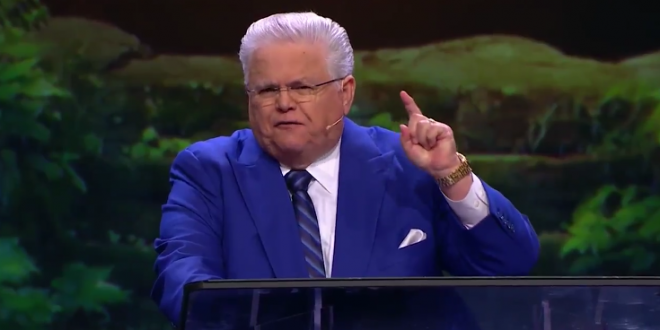 Cornerstone Church of San Antonio, Texas, a prominent evangelical congregation headed by Pastor John Hagee, has garnered controversy for hosting an event that featured a widely circulated video of a crowd shouting the anti-Biden chant, “Let’s go, Brandon.” On Saturday evening, the Twitter account PatriotTakes posted a clip of a large gathering at Cornerstone in which a crowd was chanting “Let’s go, Brandon,” a saying that has become a popular euphemism for “F*** Joe Biden” in recent weeks.

Cornerstone released a statement to multiple media outlets distancing themselves from the event and the viral video of the chant. “This past week, Cornerstone Church facilities were used by an outside organization. Cornerstone Church is not associated with this organization and does not endorse their views,” the church stated. Oklahoma Pastor Jeremy Coleman was quoted by News 4 San Antonio as denouncing the event, stating that churches should be “places of unconditional love for your neighbor.”

The piece goes on to quote other evangelical leaders who are condemning the church for hosting the far-right QAnon event.

Earlier this year John Hagee was hospitalized for COVID after having preached that “Jesus is the vaccine.” He has since been vaccinated.

In 2005 Hagee called Hurricane Katrina “the judgment of God” over New Orleans’ Southern Decadence festival. He recently appeared on JMG when he declared that “atheists killed Jesus.”

Hagee has said Sodom and Gomorrah was only a “pilot study” for killing homosexuals. He has also said that God sent Hitler to enable the creation of Israel.

The Q-Anon crowd is at televangelist John Hagee’s Cornerstone Church in San Antonio.

They are chanting, “Let’s Go Brandon” from the church pews. pic.twitter.com/pGqUmUXezn

Here’s another angle. This wasn’t a spontaneous crowd chant. This was led from the stage. pic.twitter.com/tWh9vvasau

Previous House To Vote Tomorrow On Censuring Rep. Paul Gosar And Removing Him From House Oversight Committee
Next Rioter Who Tased Cop Tries To Recant His Confession