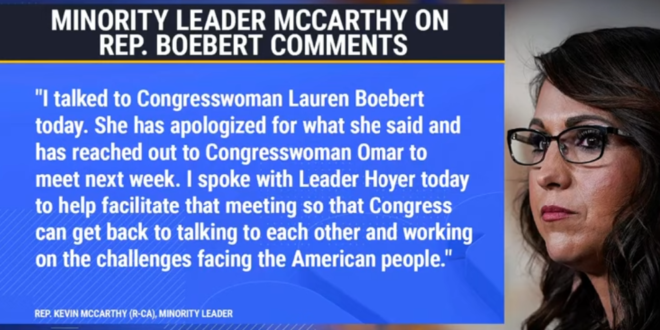 “I spoke with Leader Hoyer today to facilitate that meeting so that Congress can get back to talking to each other and working on the challenges facing the American people.” – House Minority Leader Kevin McCarthy, in a statement issued this afternoon.

The statement, you’ll note, fails to to even mildly criticize Boebert’s highly offensive suggestion that Omar might be considering a suicide bombing attack on the US Capitol because she is Muslim.

This is upsetting for many reasons. Yes, it’s anti-Muslim, and @Ilhan has a young child who will see this. Even worse, this slur will inspire more death threats to Ilhan and her family. @RepBoebert should be held accountable but so too should @GOPLeader McCarthy who condones it. https://t.co/nK10mdqITU

I guess Wendy is saying that Kevin McCarthy made Boebert issue the “apology” statement. pic.twitter.com/ZkOFtoxs3Z

Lauren Boebert once again lobbed a homophobic attack toward Pete Buttigieg saying he’s “still at home trying to figure out how to chestfeed.”

That’s one more bigoted comment from Lauren Boebert at the same event where she attacked Ilhan Omar with anti-Muslim rhetoric. pic.twitter.com/WLOgkH4WSk

Previous Voldemort: If Trump Was Still President, The US Would “Already Have Modified Vaccines” For Omicron [VIDEO]
Next CHATTER AWAY: Overnight Open Thread