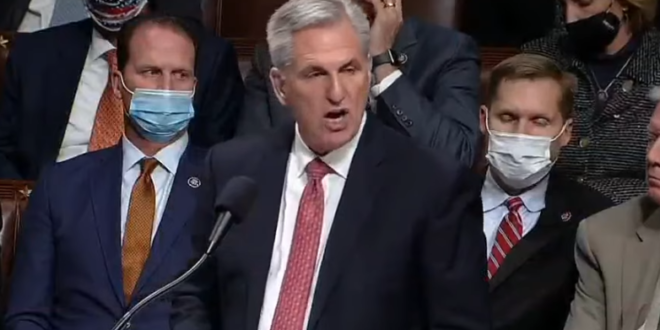 Democrats began Thursday hoping to hold a swift vote on the signature spending initiative, putting an end to months of intense, internal wrangling among their own liberal and moderate ranks. The bill’s passage would have notched another major milestone for Biden just days after he signed into law a separate effort to invest $1.2 trillion in the nation’s infrastructure.

But their timetable hit an unexpected snag after House Minority Leader Kevin McCarthy (R-Calif.) took to the chamber floor beginning in the evening. He soon embarked on a form of filibuster, using the unlimited time available to House leaders ahead of votes to rail on the roughly $2 trillion bill. McCarthy’s winding speech attacked Democrats over a broad range of issues, including border security and Afghanistan policy, and repeatedly mischaracterized their exact spending ambitions.

Republican Leader Kevin McCarthy rose at 8:38 p.m. Thursday, ostensibly to speak in opposition to Democrats’ social-spending and climate bill. But it quickly became apparent that he was auditioning for the job of Speaker of the House.

And by the time he wrapped at 5:10 a.m.—eight hours and 32 minutes later—it was clear that he had an audience of one: ex-President Donald Trump, a figure who is still widely seen as the true commander of the Republican Party and still a critic of McCarthy for not doing more to keep Trump in the White House after his electoral loss.

He criticized the Nobel Peace Prize committee for denying Trump the recognition and blasted Democrats for two impeachments: “​​It was all lies.” And McCarthy repeatedly claimed China unleashed COVID-19 on the world—despite new doubts about the virus’ origin raised just hours earlier in a widely respected journal.

“I don’t know if they think because they left, I’m going to stop,” Mr. McCarthy vowed, as the Republicans seated behind him applauded. “I’m not.”

Yielding the floor shortly after 5 a.m., he spoke for eight hours and 32 minutes. It was the longest continuous House speech in modern history, surpassing one by Representative Nancy Pelosi of California in 2018.

While the House has no equivalent to the Senate filibuster, Mr. McCarthy used the so-called magic minute rule, which allows the House speaker, the majority leader and the minority leader to talk for as long as they want.

If you took the worst orator in the world

Gave him the worst speech in the world

That would be a lot like listening to Kevin McCarthy tonight.

We are hearing rumors that the front row of GOP hostages behind Kevin McCarthy are asking whether they can just be censured instead.

The media has a responsibility to accurately describe this McCarthy speech, because normal people won’t watch it, and just saying it was long or partisan does not accurately describe what this potential of the Speaker of the House is showing that he is all about.

This bears repeating. McCarthy, who House Republicans chose as their Leader, is ranting and blathering about everything other than the specifics of the bill he’s filibustering—because it’s loaded with popular policies that would make life better for everyone. https://t.co/8brB9rUbsf

House Minority Leader Kevin McCarthy tells a bizarre story in which he claims a Chinese general told his “friend in the Senate” that “you’re weak, America, because you believe in God, and you take fentanyl.”

Closing in on hour two of his speech against the Build Back Better Act. pic.twitter.com/gs09kTj0kV

Kevin McCarthy says he became a Republican because when he was in the 6th grade he turned on the TV and Jimmy Carter, wearing a sweater, told him to turn the heater down pic.twitter.com/rsp9L4M2tA

Y’all, never forget this moment next time the @GOP tries to tell you they care about working people & families. The only thing @GOPLeader cares about is wasting our time. Miss me with that.

“Madam Speaker, today I got my booster shot,” McCarthy said, as his speech now has gone on for 3 hours and nine minutes. “I got a little headache now. But this is too important.”

It is a feat of epic proportions to speak for four hours straight and not produce a single memorable phrase, original insight or even a joke.

McCarthy thinks he is a wit but so far he has proved he is only half right.

Never in the field of human conflict were so many words listened to by so few people.

Good night America—on Friday we pass President Biden’s Build Back Better package and get back to work.

Previous Austria: Full National Lockdown And Compulsory Vax
Next NY Gov Calls For NYC Workers To Return To The Office