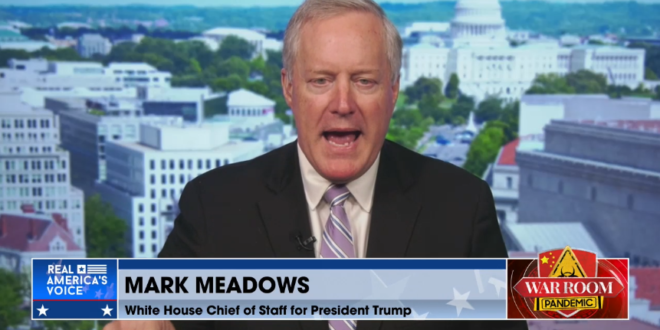 Speaking with recently-indicted Steve Bannon on his podcast, The War Room, Meadows said, “I would love to see the gavel go from Nancy Pelosi to Donald Trump, talk about melting down, people would go crazy.”

“She [Nancy Pelosi] would go from tearing up a speech to giving the gavel to Donald Trump, oh she would go crazy,” Meadows continued, referencing Pelosi’s ripping up a printed copy of Trump’s State of the Union address in 2020.

The Speaker of the House is not required to be a member of Congress. In June, Trump called the idea of being Speaker “interesting.” Cultists have fantasized about Biden and Harris being impeached, leading to the House Speaker, Trump, then gaining the presidency.

Trump’s former Chief of Staff Mark Meadows floats the bizarre idea that Trump should be Speaker of the House to own the libs: