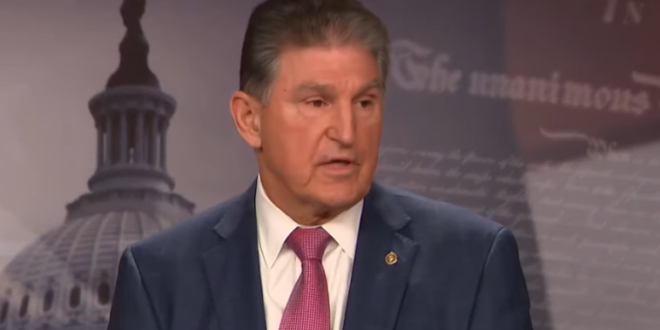 “I won’t support a multi-trillion bill without greater clarity,” Manchin, a holdout who has often served as a critical roadblock to Biden’s agenda, told reporters.

He portrayed the bill as being filled with “shell games” and “budget gimmicks” that would end up costing far more than its $1.75 trillion price tag. Instead, Manchin demanded immediate action in the U.S. House of Representatives on a $1 trillion infrastructure bill already approved by the Senate.

Ugh. Just nonstop bad faith from @Sen_JoeManchin, cloaked in phony pieties casting him as the only responsible party in town.

If he wants to know why people keep accusing him of operating in bad faith, look no further than what he’s saying right now. Baloney from top to bottom.

That Joe Manchin press conference could’ve been an email

“It’s time to pass a bill and quit playing games.”

— Sen. Joe Manchin (D-WV) with no sense of irony. pic.twitter.com/w3mvUvgRDK

Sen. Joe Manchin says he wants more time to analyze the reconciliation bill’s changes to U.S. policies, and “will not support” a bill that “irresponsibly adds to our $29 trillion in national debt that no one seems to really care about or even talk about” pic.twitter.com/mepuSITg0i

Sen. Joe Manchin: “While I’ve worked hard to find a path to compromise, it’s obvious: compromise is not good enough for a lot of my colleagues in Congress. It’s all or nothing.” https://t.co/xY8G8YiI04 pic.twitter.com/YceJjcCLGR