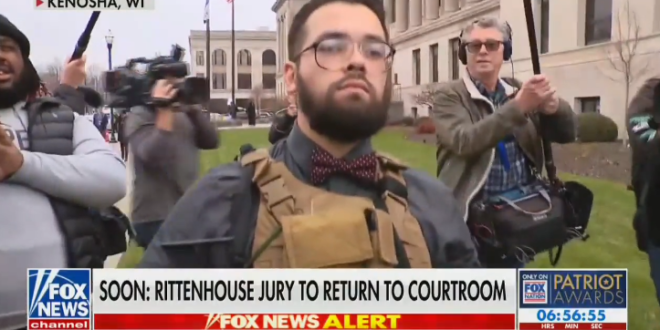 Tensions are high outside the Kenosha Courthouse where a jury deliberates the fate of Kyle Rittenhouse, currently on trial after killing two men and wounding a third in August 2020 during riots that followed the police shooting of Jacob Blake.

Reporting on the scene, Fox News reporter Alexis McAdams reported that a man was spotted outside the courthouse with an AR-15 rifle.

Local authorities are concerned about a return to the deadly riots that led Rittenhouse to show up in Kenosha in the first place. If the past is prologue, we can all agree that showing up in Kenosha with an AR-15 can prove to be an unsafe, and deadly, practice.

WATCH: @FoxNews shows new video of a man armed with an AR-15 walking outside of the courthouse in Kenosha as the jury deliberates in the Kyle Rittenhouse trial. pic.twitter.com/BgU1FbMnUn

Man walks around outside of the Kenosha County Courthouse with his AR-15. pic.twitter.com/FmuXLASi9e

This is exactly why they are afraid to convict. There is a supporter with an AR-15 outside of the courthouse. These jurors are scared for their lives. 💔 https://t.co/gALOa1Vwhn