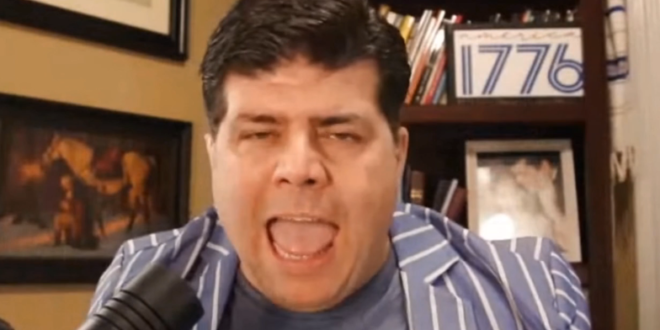 MAGA Pastor: America Was Founded As A Church

“Every signer of our Declaration of Independence, every one of them, were descendants of the tribes of Israel. You know what, I might was well be seated because it looks like I’m gonna preach these verses instead of reading.

“Every single descendant who signed our Declaration were Israelites. Somebody say with with me, America was a church before she was a nation.

“Now, how’s your fool ear gonna separate church from the state when we were born as a church?” – MAGA pastor Shane Vaughn.

And now a 2010 backstory for God’s faithful servant:

A south Louisiana preacher was slapped with $100,000 in fines on top of a slew of criminal charges. John Vaughn, who also acted as an insurance agent, recently had his license yanked after allegedly stealing thousands of dollars.

Police describe Vaughn as a chameleon, changing his look and name repeatedly. The 37-year-old is accused of stealing a 2-year-old’s identity to defraud a life insurance company. He is accused of swiping $20,000 from an annuity he sold to a person that didn’t even exist.

Vaughn is also charged with bank fraud, issuing worthless checks and felony theft. Currently, he is being held in the East Baton Rouge Parish Prison on a $25,000 bond. He was booked on similar charges in other parts of the state, including Livingston and Jefferson parishes.

Vaughn recently appeared on JMG when he declared that God told him to tell everyone that the vaccines are going to soon stop working because of all that sodomy you’re doing.

We also took note of his claim that climate change is a satanic lie because it’s really God who is destroying the environment because of your sinning.

Before that, we heard from him when he declared that Facebook’s banning of Trump was “the same mistake Satan made when he killed Jesus Christ.”

Right-wing pastor Shane Vaughn claims that “every signer of our Declaration of Independence—every one of them—were descendants of the tribes of Israel,” which is why “America was a church before she was a nation.” pic.twitter.com/QXJdsP9Put

Right-wing pastor Shane Vaughn doesn’t worship “that pansy, homosexual-type Jesus,” but rather the radical Jesus who would tell Caitlyn Jenner that she looks “like your daddy, the Devil.” pic.twitter.com/sSCyYXHST8