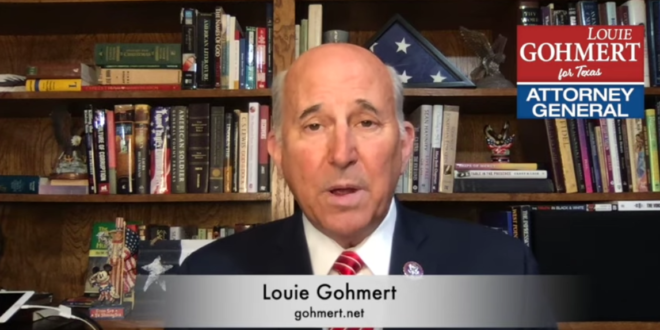 U.S. Rep. Louie Gohmert, R-Tyler, announced Monday he is running for attorney general, challenging fellow Republican Ken Paxton, in the already crowded primary. “Texas I am officially running to be your next Attorney General and will enforce the rule of law,” Gohmert tweeted after announcing his campaign on Newsmax.

Gohmert announced earlier this month that he would join the GOP lineup against Paxton if he could raise $1 million in 10 days. The 10th day was Friday. Gohmert said in an announcement video that he has “reached our initial goal of raising $1 million in order to start a run for” attorney general.

Gohmert is at least the fourth primary opponent that Paxton has drawn. The others include Land Commissioner George P. Bush, former Texas Supreme Court Justice Eva Guzman and state Rep. Matt Krause of Fort Worth.

Last month Krause kickstarted his own campaign with an attack on pro-LGBT books in public school libraries.

Stand by for Gohmert to pull a similar stunt.

Gohmert recently appeared on JMG when he asked the US Forest Service if there was any way they could alter the moon’s orbit to help combat climate change.

Rep. Louie Gohmert (R), running for Texas attorney general, is the 14th House member to run for another office in 2022 rather than seeking reelection.