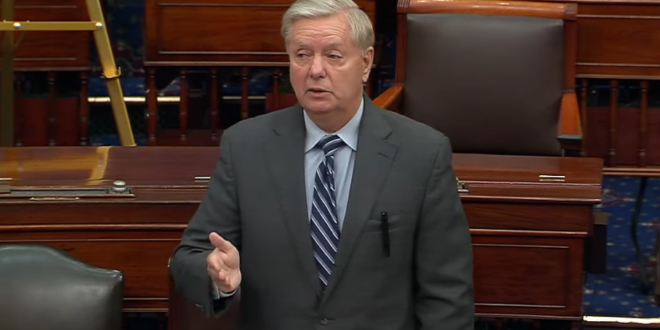 President Donald Trump had just returned to the White House from his rally at the Ellipse on Jan. 6 when he retired to his private dining room just off the Oval Office, flipped on the massive flat-screen television and took in the show. At the other end of Pennsylvania Avenue, thousands of his supporters were wearing his red caps, waving his blue flags and chanting his name.

Senate leaders also had been evacuated by Capitol Police and taken to an undisclosed location, but many lawmakers remained in their chambers for a few minutes before they were led to safety.  Sen. Lindsey O. Graham was irate that senators were forced to flee their own chamber. He yelled at the Senate sergeant-at-arms. “What are you doing? Take back the Senate! You’ve got guns. Use them.” The South Carolina senator was adamant. “We give you guns for a reason,” he repeated. “Use them.”

Jan. 6 attack: The Post reconstructs the Capitol siege and how Trump refused to tell the mob to disperse for 187 harrowing minutes https://t.co/80J2pu9lkh

“We give you guns for a reason. Use them,” Sen. Lindsey Graham reportedly yelled at the Senate sergeant-at-arms on Jan. 6th. https://t.co/CcRDbp4NRv

There could have been dozens of Ashli Babbitts. On January 6 Lindsey Graham called for law enforcement to shoot the rioters. He yelled at them, “Take back the Senate! You’ve got guns, use them. We give you guns for a reason. Use them!”. They didn’t, except once. pic.twitter.com/4vkst8bwA4

Previous Franklin Graham: God Is The Cause Of Climate Change And He Will Soon Murder Everybody Who Rejects Jesus
Next Man Who Hired Child Molester Josh Duggar Wants Money To Stop Advertising Of Rainbow-Colored Toys