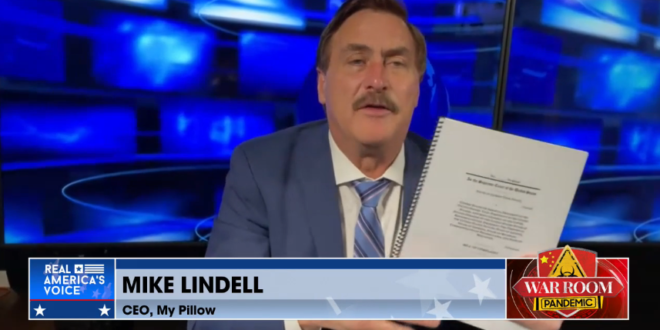 Lindell has been claiming since summer that he was coordinating a lawsuit among “tons” of state attorneys general, as many as 30, to be filed at 9 a.m. Tuesday directly with the U.S. Supreme Court and that he would spend the long Thanksgiving weekend explaining the suit during an ad-free webcast. On Friday, Lindell appeared on Trump adviser Steve Bannon’s podcast, where he was asked: “Where do we stand with these AGs?”

Lindell said that only one attorney general, Republican Steve Marshall of Alabama, had definitively refused to be involved in the lawsuit. “Most of them have said, Mike, let’s get together after this Thanksgiving week,” he told Bannon. Lindell had initially promised that the Supreme Court would “reinstate” Trump in August, then moved that target to September, then said it would happen by the end of 2021 as a result of his lawsuit.

NEW — Pillow monger Mike Lindell did not file the lawsuit with the Supreme Court that would reinstate Donald Trump as he promised he would, but he IS loading up his election-fraud-a-thon with ads for his sleep products, which he promised he wouldn’t.https://t.co/YqrXg9Hl8x

War Room – Steve Bannon & Mike Lindell discuss his lawsuit & the need for everyone to get educated, involved and contact their state attorney generals