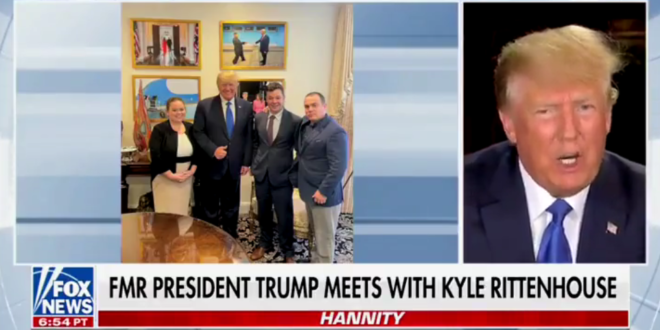 Former President Donald Trump said he was recently visited at his Palm Beach, Florida, resort by Kyle Rittenhouse, the teenager who was acquitted last week on all charges after fatally shooting two people and wounding a third during protests in Kenosha, Wisconsin, last summer.

“He called. He wanted to know if he could come over, say hello, because he was a fan,” Trump said during an interview with Fox News’ Sean Hannity that aired Tuesday night.

Trump said Rittenhouse, 18, had left Mar-a-Lago “a little while ago,” and Hannity had earlier said that his interview with Trump took place on Monday. During the interview, Fox showed a picture of Rittenhouse posing with Trump.

Trump claims the January 6 insurrectionists were members of antifa. They were actually his supporters. pic.twitter.com/1Lrz52IP6S

we will all be dust and bones and Hannity and Trump will still be bragging about Trump acing his dementia test pic.twitter.com/hkHOYLwFB4

Kyle Rittenhouse went to visit Trump after his not guilty verdict and Hannity has a photo pic.twitter.com/frCfBjIfRS