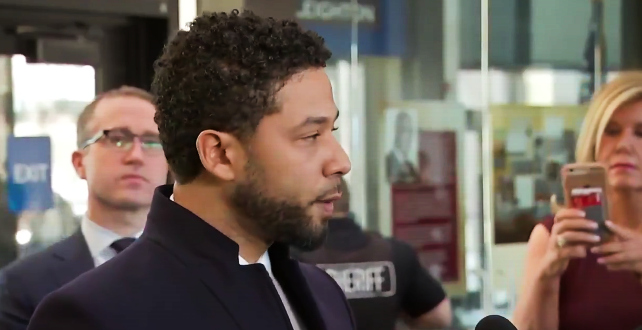 Jussie Smollett’s trial began Monday nearly three years after the former “Empire” actor reported he was the victim of a racist, homophobic attack in Chicago.

The actor is facing charges for what authorities say was a fake attack. Smollett told police he was walking home early in the morning back in January of 2019 when two men recognized him and began hurling racial and homophobic slurs at him.

Smollett faces six counts of disorderly conduct, a class 4 felony and carries a sentence of up to three years in prison but experts believe if Smollett is convicted he would most likely be placed on probation.

Jussie Smollett arrives at court in Chicago, where he stands trial for allegedly faking a hate crime. The actor faces six charges of making four false reports to police.https://t.co/bI89eJMWbW

Previous Oath Keeper/Actor Charged In Riot Tells Judge He Is Immune From Prosecution Due To His “Divine” Rights
Next Boebert: Ilhan Omar “Sympathizes With Terrorists”