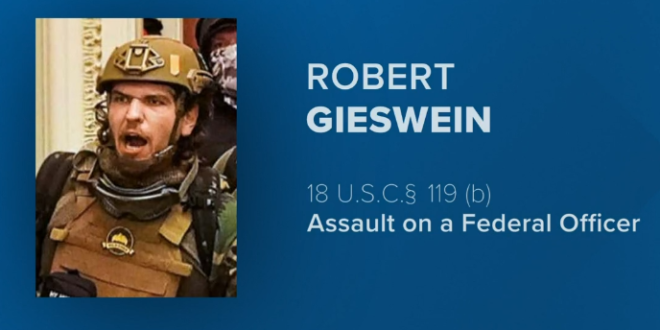 A violent Capitol rioter is seeking his pretrial release from the DC Jail, arguing that it’s “not healthy” to be “stuck in a bubble” with other insurrectionists who share his views. Robert Gieswein is member of the Three Percenters militia group who’s accused of assaulting police officers at the Capitol after traveling to Washington from Colorado “prepared for battle,” according to media reports.

“I am not an expert in anything, but I do know it’s not healthy to spend every day in here like it’s Groundhog’s (SIC) Day, with people with the same viewpoint, in the same situation, because we are all portrayed by much of the media as one type of person,” Gieswein wrote. “It is natural in this environment for the conversation to turn to January 6, and for us to look to each other for strength.”

Jailed MAGA rioter seeks release because it’s ‘not healthy’ to be ‘stuck in a bubble’ with other insurrectionistshttps://t.co/eTJaqOpBwG

Previous FDA Approves Pfizer, Moderna Boosters For All Adults
Next German Catholic Church Holds “Penance Service” Over Sexual Abuse Scandal: “This Is A Confession Of Guilt”