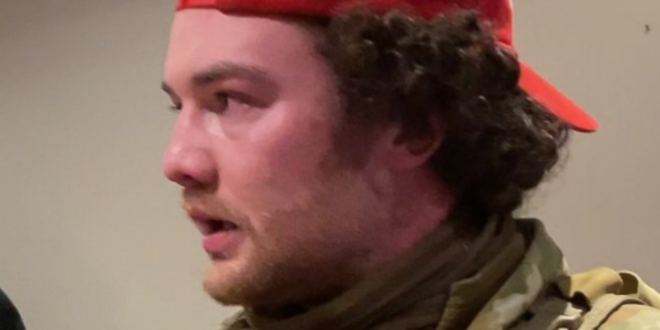 Two alleged Capitol rioters are saying they are being “force fed” critical race theory in a Washington, D.C., jail where they have been detained. Ryan Nichols of Texas and Robert Morss [photo] of Pennsylvania wrote a letter to a D.C. federal judge on Tuesday alleging that they have endured “constitutional, human, and civil rights violations.”

Among a list of 77 grievances, the men allege that they must beg for water and medical aid, and that they are not allowed religious services or visitors. “We are force fed CRT [critical race theory] propaganda on tablets,” the two wrote. They also alleged that they are “force fed reeducation propaganda” and that there is “anti-White Racial messaging” on their tablets.

Read the full article. Both men have been charged with assaulting Capitol officers, which is why they remain in jail.

CAPITOL RIOT ARREST UPDATE:
*2 East Texas men have been arrested.
*In video, Ryan Nichols yells into bullhorn: “If you have a weapon, you need to get your weapon!”
*Charged with assault on an officer & using dangerous weapon.
*Other man is Alex Harkrider.https://t.co/c0kVfnEQeE pic.twitter.com/gMKQtQTaAV

*FBI finds more weapons in possession of Capitol riot defendant Robert Morss.
*Substitute teacher in PA.
*His lawyer says he is not a flight risk.
*Text msg: “I’m considering leaving the country. They are crushing everyone.”
*Feds are fighting his release.https://t.co/6buvfAJMmL pic.twitter.com/xjB8SCjxEX