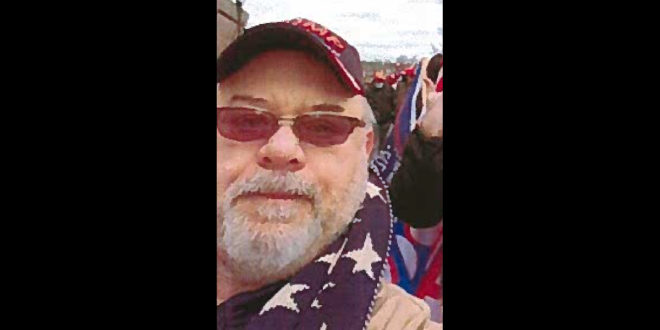 A Shelbyville man is under arrest for carrying a loaded gun on Capitol grounds and assaulting law enforcement officers during the breach of the U.S. Capitol on Jan. 6. Mark Andrew Mazza, 56, is charged with illegal possession of a firearm on Capitol grounds, civil disorder and assaulting, resisting or impeding certain officers with a dangerous weapon, among other charges.

According to court documents, Mazza brought a Taurus revolver, loaded with three shotgun shells and two hollow-point bullets, to the Capitol. Mazza is also reported to have held a baton, joined in a group that was assaulting officers and swung the baton at police while at one point yelling, “This is our f—- house! We own this house!” Mazza also reportedly participated in “heave-ho” efforts to apply significant physical force on the officers.

Federal agents noted that the model of weapon Mazza allegedly carried on Capitol grounds “is one of a few handguns that can fire both shotgun shells and regular bullets through the barrel.” The choice of weapon suggested to federal agents that Mazza intended “to use the weapon against multiple targets at the same time,” they allege.

The gun fell from the waistband of Mazza’s pants during a back-and-forth battle with a police officer listed only as CW-1, or Complaining Witness 1, in court papers.

Mazza reported the gun “stolen” to the Shelbyville, Indiana Police Department on Jan. 8, the documents indicate. He claimed he was in Cincinnati, Ohio, on Jan. 5, 2021, and that the gun was stolen from his rental car from near the Hard Rock Casino sometime between 10:30 a.m. on Jan. 5 and midnight on Jan. 6.

Self-Proclaimed Jan. 6 ‘Hero’ Charged with Bringing Gun to Capitol Claims He Never Hit a Cop: ‘I Can Barely Make A Fist Because of My Arthritis’ https://t.co/hQlt01kLR3

A Shelbyville man is under arrest for carrying a loaded gun on Capitol grounds and assaulting law enforcement officers during the breach of the U.S. Capitol on Jan. 6.https://t.co/tHVLUZpF1N

This guy dropped his gun after assaulting a police officer on #J6. Then he filed a false report with the ATF saying his gun was stolen and also lied to the FBI about his role in assaulting officers. He’s in a shit ton of trouble in other words. https://t.co/O2YYi4cIYl

NEW: Feds say Indiana’s Mark Mazza brought a gun to the Capitol on Jan. 6, lost it while he was battling cops, and then falsely reported his gun was stolen. pic.twitter.com/meovTsdtYn

Court unsealed the Jan 6 case against Mark Mazza of Indiana, who is accused of being part of the “heave-ho” push against the police line amid the combat at Capitol

Charging documents say Mazza yelled at police, “This is our f**** house! We own this house!” pic.twitter.com/g1hYK64JnT