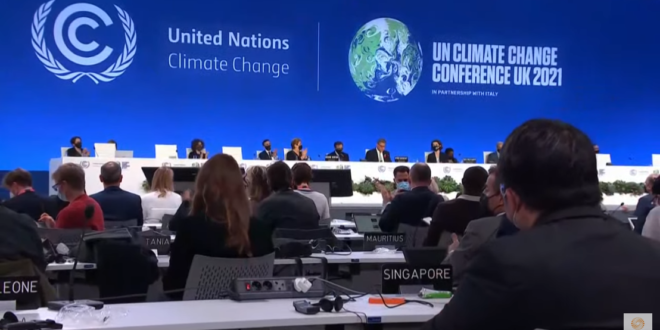 With the bang of a gavel, diplomats from nearly 200 countries on Saturday struck a major agreement aimed at intensifying efforts to fight climate change, by calling on governments to return next year with stronger plans to curb their planet-warming emissions and urging wealthy nations to “at least double” funding by 2025 to protect the most vulnerable nations from the hazards of a hotter planet.

The new deal will not, on its own, solve global warming, despite the urgent demands of many of the thousands of politicians and activists gathered at the climate summit here. It leaves unresolved the crucial question of how much and how quickly each nation should cut its emissions over the next decade. And it still leaves many developing countries far short of the funds they need to build cleaner energy and cope with increasingly extreme weather disasters.

Moments before it appeared that nations at the COP26 would agree to a decision on how the world should fight climate change, delegates from China and India proposed a last-minute edit to a contentious provision around transitioning away from polluting fuels.

The paragraph initially called for the “phaseout of unabated coal and inefficient fossil fuel subsidies” and would have been the first explicit call out of polluting fuels in a U.N. climate agreement.

India’s climate negotiator Bhupender Yadav proposed that the text be changed to call for a “phase-down” of unabated coal, with an added reference to “targeted support to the poorest and most vulnerable.”

COP26’s aim has been to set the stage for cutting global greenhouse gas emissions steeply enough to limit warming to the Paris Agreement’s target of 1.5°C above preindustrial levels. Emissions are currently increasing, and need to be cut by nearly half by 2030 to be consistent with the 1.5-degree goal.

If warming goes beyond 1.5°, some of the most dangerous climate change impacts would be more likely to occur, according to climate science reports. They include the loss of large portions of the world’s ice sheets, more damaging extreme weather and heat waves so severe they could make some regions unlivable for part of the year.

The final text points explicitly to coal, which is the single biggest contributor to climate change. In all 25 COPs before Glasgow, never has an agreement mentioned coal, oil or gas, or even fossil fuels in general, as drivers — let alone the main cause — of the climate crisis.

The talks went into overtime as deep divisions remained on key issues, including unprecedented language on fossil fuels and the amount of money the developed world should pay the Global South to help it adapt to the climate crisis.

Mohamed Adow, director of the Nairobi-based thinktank Power Shift Africa, said: “The needs of the world’s vulnerable people have been sacrificed on the altar of the rich world’s selfishness. The outcome here reflects a COP26 held in the rich world and the outcome contains the priorities of the rich world.”

Many poor nations accepted defeat on their pleas to put stronger provisions on loss and damage into the text, in the closing hours of the conference, in order to allow the broader deal to go through.

Making the concession, Lia Nicholson, lead negotiator for Antigua and Barbuda, which chairs the 37-strong Alliance of Small Island States, said: “We are extremely disappointed and we will express our grievance in due course.”

Language on coal is watered down from ‘phasing out’ to ‘phasing down’ at the insistence of India, but there is still a lot to be optimistic about. We now need to be grown up about how we talk about climate change. We need collaboration not culture wars. https://t.co/zWViAnSkGj