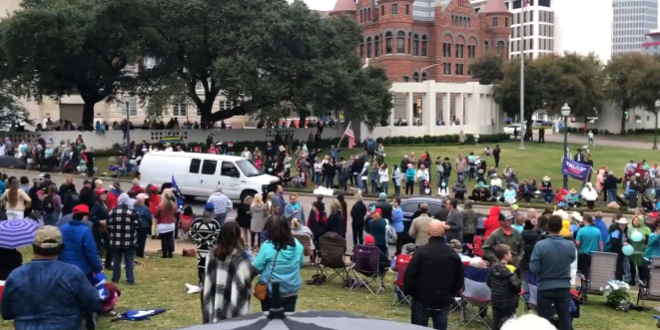 Hundreds of QAnon believers have gathered in Dallas to await the arrival of John F. Kennedy Jr. The group is there because of a popular QAnon theory that JFK Jr. will make an appearance before midnight today, November 2, at the infamous grassy knoll to declare Donald Trump as president.

The QAnon theory says that JFK Jr. has been hiding for more than two decades only to return as Trump’s vice president. The group also believes Trump will step down and let JFK Jr. step in as president and appoint former National Security Advisor Michael Flynn as Vice President.

According to Whiplash347, an account with almost 250,000 followers, Trump will be reinstated as the 18th president of the United States, because everything since 1871 (the date the Sovereign Citizen movement claims the U.S. became a corporation) is “illegal.”

Whiplash347 continues that Trump will then step down, and John F. Kennedy Jr., who died in a plane crash in 1999, will become president “like he would of if it wasn’t for Killary plotting to kill him.” Joining JFK Jr. as vice president will be disgraced former National Security Adviser Michael Flynn.

Another part of the conspiracy claims that JFK’s return will coincide with the reversion to the Julian Calendar, which means the date will change immediately back to Oct. 20.

12 minutes until the big reveal pic.twitter.com/poTaNBS5gp

Members of the crowd don’t seem happy with the local news crew. pic.twitter.com/BpjN2kmE7n

There’s a sizable crowd of QAnon believers in Dallas’s Dealey Plaza, where they’re convinced JFK Jr. and plenty of other dead celebrities will return. Lots of talk online about Kobe Bryant and Robin Williams. pic.twitter.com/HG8MgdHLFc

The JFK Jr wing of QAnon has become convinced that the Kennedy family is going to make some sort of grand reappearance in Dallas tomorrow and announce that Trump is President again. pic.twitter.com/BZhxTbvApj

The QAnon people are walking up to random people they think are dead celebrities in Dallas today and introducing themselves. So far they have seen “Robin Williams” and “Dale Earnhardt.”

They now think JFK Jr. will reveal himself at a Rolling Stones concert tonight. pic.twitter.com/oyu7YkRgBk

QAnon rally on the Grassy Knoll in Dallas. They believe JFK is coming back today to make a speech. #qanon #grassyknoll #dallas pic.twitter.com/lFw0gbxVl5

Gematria is a form of numerology where letters are converted to numbers, then added together

Two words, sentences or phrases with an equal “value” are believed to have spiritual meaning pic.twitter.com/c68kohUkxU

Crowd, including a group holding a Trump/Kennedy 2020 sign, breaks out into a rendition of the national anthem on the grassy knoll. A segment of QAnon followers believed JFK Jr — who has been dead for more than 20 years — would run on a ticket with Trump in 2020 pic.twitter.com/I62yTy8VA7

Out here on the Grassy Knoll with Trump/QAnon folks as they await the return of JFK. #QANON #Grassyknoll pic.twitter.com/5SuUq6OuYs

Previous NYPD Honcho: Only 0.25% Of Cops Sidelined Over Vax
Next Schumer: Dems Have Deal On Lower Prescription Prices