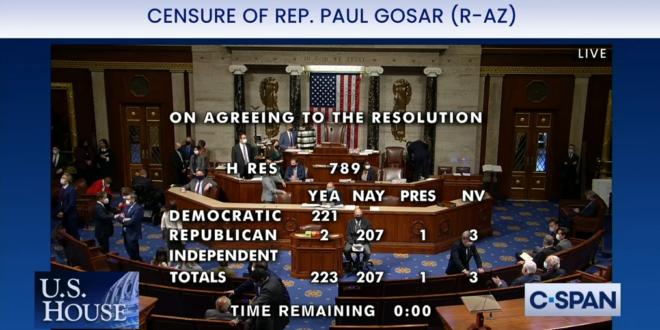 As the House voted on the resolution to censure him, GOP Rep. Paul Gosar was standing in a group in the back of the House floor. Those around him included GOP Rep. Marjorie Taylor Greene, who Democrats stripped of her committee assignments earlier this year, GOP Rep. Lauren Boebert and outgoing Freedom Caucus Chair Andy Biggs.

The resolution strips Gosar of his two committee assignments. The vote marks the first time the House voted to censure a sitting member in more than 10 years. Gosar of Arizona said that he did not believe that the violent video targeting Rep. Alexandria Ocasio-Cortez and President Biden was “dangerous or threatening.”

GOP Rep. Anthony Gonzalez of Ohio — who voted to impeach Trump and decided to retire in part because of threats to his safety — is a NO on the Gosar resolution.

And Cheney & Kinzinger both voted YES — they may wind up being the only Republicans to vote in favor.

House censures Gosar over his violent video, 223-207, with 2 Republicans (Cheney, Kinzinger) joining. This was a necessary action – his action could not be accepted and normalized.

Previous Rittenhouse Lawyers Seek Mistrial Over Video Quality
Next QAnon Rep: I’m Getting My Committees Back Next Year