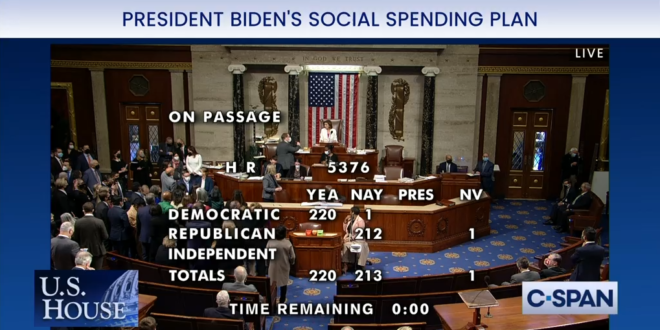 More than a year after President Biden clinched the White House on a pledge to “build back better,” House Democrats delivered on that promise, voting to approve more than $2 trillion in spending initiatives that would overhaul federal health care, education, climate, immigration and tax laws.

The measure adopted Friday amounts to a dramatic re-envisioning of the role of government in Americans’ daily lives. It sets aside in some cases historic sums to aid workers, families and businesses, seeking to rewire the very fabric of an economy still recovering from the financial devastation wrought by the coronavirus pandemic.

In bearing the name of the president’s 2020 campaign slogan, the successful 220 to 213 House vote on the Build Back Better Act marks the second legislative milestone for Democrats this month.

Cheers on the House floor as Democrats pass Pres Biden’s signature legislation, the $1.9T social spending and climate change bill known as Build Back Better. It now goes to the Senate where there may be big changes to come. pic.twitter.com/bae5JdGWJn

I’m glad the House passed #BuildBackBetter. This bill makes historic investments in child care and clean energy, and will ensure corporations stop cheating the system. Now, it’s time for the Senate to quickly act, pass this bill, and get it to the President’s desk.