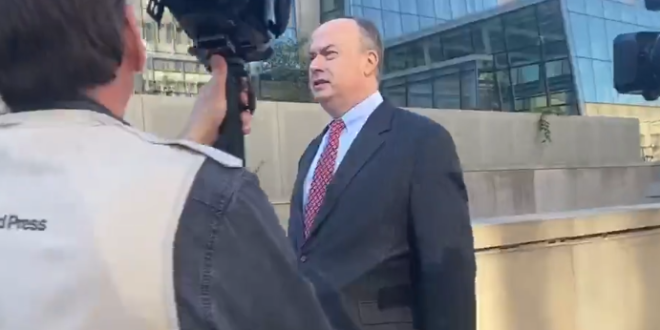 Rep. Bennie Thompson (D-Miss.), the chair of the House committee investigating the Jan. 6 attack on the Capitol, said he would not rule out contempt charges against Jeffrey Clark, a former Trump Department of Justice official implicated in the former president’s efforts to forward his election fraud claims.

“It’s under consideration, absolutely,” Thompson said. Thompson’s comments came after a relatively brief deposition with Clark, who sat down with committee staff on Friday and apparently refused to respond to questions.

Photos of Clark arriving at and leaving the deposition shared by reporters for CNN and CBS suggest he sat with investigators for under two hours — a short time frame, considering how long such depositions can go on.

Former Assistant Attorney General Jeffrey Clark had nothing to say as he and his attorney departed a deposition with the January 6th cmte this afternoon pic.twitter.com/mbHyebFqLv

Jeffrey Clark’s apparent invocation of various privileges brings these claims to new levels of absurdity (among other reasons, *Donald Trump* hasn’t even claimed privilege relating to Clark). Congress needs to hold Clark in contempt, and DOJ must charge.

Previous GOP Rep: Trump Will Try To Steal The Next Election
Next Hate Group Takes Out Full-Page Anti-Murkowski Ads