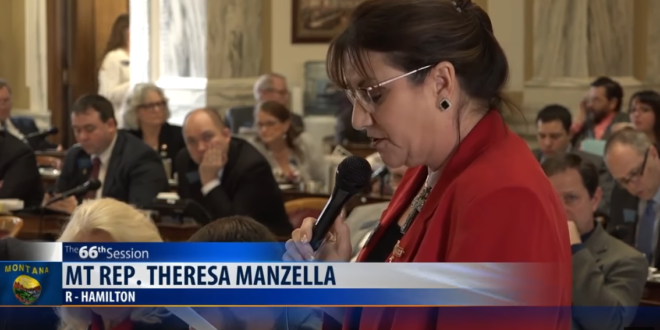 GOP State Rep: Gays Beaten For Holding Hands Are Getting The “Normal Consequences For Their Choices”

“This is one we’re going to win,” Manzella said to an eruption of “amens” and applause from attendees. “My right to live a righteous lifestyle based on my sincerely held beliefs does not end where their choice to live a perverse lifestyle begins.”

Manzella went on to say that members of the LGBTQ community like to “play the protected class card,” because queer couples in general have expressed that they’re scared to walk down the street holding hands in fear of possible violence against them for their sexuality. “I’ve got to tell you, I think those are normal consequences associated with the choices they made,” Manzella said.

The event was held in support of a part-time realtor and pastor who ended his church’s support for a local food bank over its pro-LGBT stance.

The pastor is suing because the local realtors group has filed an ethics complaint against him.

The “God, Country, Family” tour came to Clinton Community Church on Wednesday night, where speakers encouraged attendees to donate money to the church’s pastor to fund his lawsuit against the Missoula Organization of Realtors.#mtnews https://t.co/Yatbox8Ir1

hi all, this event is in Clinton tomorrow and features Montana State Sen. Theresa Manzella. her email is [email protected] pic.twitter.com/wwbRiQgMZZ

Doctors threatened for not treating patients with Ivermectin. “If someone is at death’s door and they’re circling the drain, why wouldn’t you allow them their wishes?” says Sen. Theresa Manzella. Is the demand reasonable?🤔 https://t.co/wY55YnV3iL #COVID19 #IDtwitter @MedPageID

Here’s Theresa Manzella at a rally supporting some #January6th #insurrectionists.@EllieHill can the @MTSenateDems and @MTSenateGOP get together and censure her? This is despicable and treasonous. #mtpol https://t.co/YskjZZdVPa

Montana State Rep Theresa Manzella made the case for the state legislature to call themselves back into session, write new legislation, and conduct a full-forensic audit.https://t.co/6TPMVZ2zMw