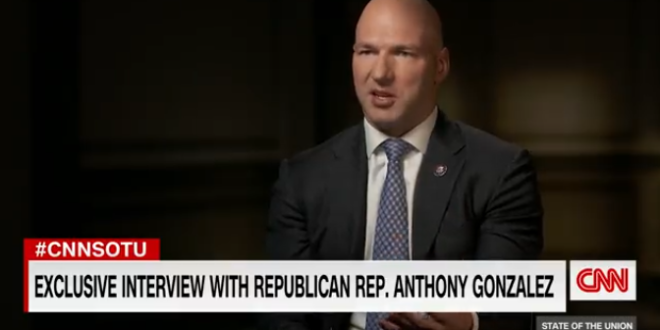 Ohio Rep. Anthony Gonzalez (R) told CNN’s “State of the Union” in an interview that aired Sunday that former President Donald Trump may try to steal the 2024 election if he decides to run and loses.

Gonzalez warned that Trump’s second attempt may be more dangerous, since he’ll have had time to examine why he failed to overturn the 2020 election, and to calibrate a better strategy the second time around.

“The cold, hard truth is Donald Trump led us into a ditch on January 6,” Gonzalez said. “The former president lied to us. If he’s the nominee again in ’24, I will do everything I personally can to make sure he doesn’t win.”

Read the full article. Gonzalez is not running for reelection.

“I felt like I had no choice in the matter. I had to do what I felt was right to protect the country,” says GOP Rep. Anthony Gonzalez on his decision to impeach former Pres. Trump after the Jan. 6 riot at the US Capitol. https://t.co/Q2XR0gctGz #CNNSOTU pic.twitter.com/Ts0BcNhutz