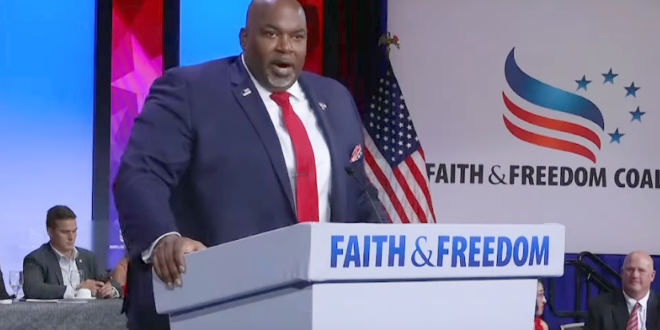 North Carolina Lt. Gov. Mark Robinson again made disparaging remarks about LGBTQ+ people, this time at a Winston-Salem church, according to a video of the sermon made on Sunday.

Robinson, a Republican who is expected to run for governor in 2024, questioned the “purpose” of being gay; said heterosexual couples are “superior” to gay couples; and that he didn’t want to explain to his grandchildren why two men are kissing if they see that on television.

In Winston-Salem, Robinson compared being gay to “what the cows leave behind” as well as maggots and flies, who he said all serve a purpose in God’s creation. “If homosexuality is of God, what purpose does it serve? What does it make? What does it create? It creates nothing,” Robinson said.

“This man’s theology and religious practices are not only flawed and a perversion of the Christian tenets; he places countless people at risk of violent attacks and even murder every time he opens his mouth.” #ncpol https://t.co/Uw8jeiqx7A