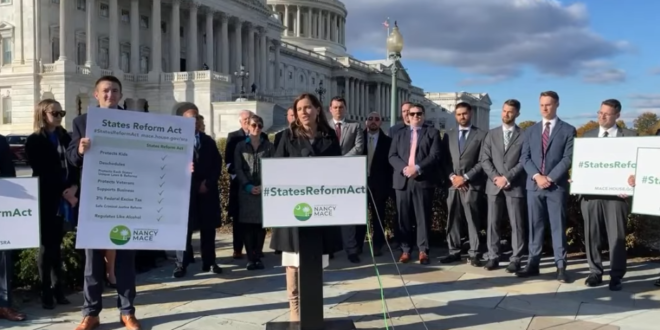 Rep. Nancy Mace, a first-term Republican from South Carolina, introduced a bill Monday to decriminalize cannabis at the federal level, which she hopes will garner more GOP support for the legalization movement.

“This legislation, I believe, has something good for everyone, whether you’re a Democrat or a Republican,” Mace told reporters outside the Capitol, where she introduced her States Reform Act.

Even though it is legal in 18 states, with medical use permissible in 37 states, marijuana is illegal under federal law. Mace’s bill would strip cannabis of its classification as a Schedule I drug under the Controlled Substances Act, which makes possession of marijuana a crime.

The chairman of the South Carolina GOP has denounced the bill, saying that its passage would lead to “rising crime, violence, and mental health issues in children.”

Mace first appeared on JMG in early January when she declared that Trump had “placed all of our lives in danger” by inciting the Capitol riot. Trump this week called for Mace to be primaried.

Her press conference on the bill is below.

Rep. Nancy Mace said she is trying to build GOP support for the bill, drawing a rebuke from a top Republican in her state https://t.co/Vo1QrhQI8b