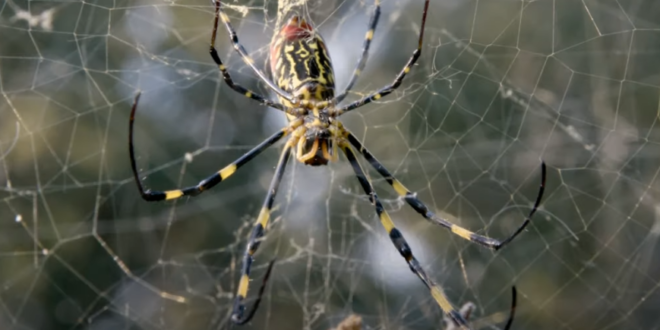 A large spider native to East Asia has spun its thick, golden web on power lines, porches and vegetable patches all over north Georgia this year — a proliferation that has driven some unnerved homeowners indoors and prompted a flood of anxious social media posts.

Millions of the large spiders have spun three-dimensional golden webs in roughly 25 counties, according to the University of Georgia. The Joro — Trichonephila clavata — is part of a group of spiders known as orb weavers for their highly organized, wheel-shaped webs.

It’s not clear exactly how and when the first Joro spider arrived in the U.S. CBS affiliate WGCL-TV reported it is believed the spiders arrived in a shipping container that was dropped off somewhere along Interstate 85 in Georgia.

The population of invasive Joro spiders, which are native to East Asia, has grown in northern Georgia, according to reports. The University of Georgia reports that millions of bright yellow, palm sized spiders have cast their webs in “roughly 25 counties” of the state. pic.twitter.com/02sopjZ8Iz

Millions of huge invasive spiders from Asia take hold in Georgia: “Like a scene out of ‘Arachnophobia'” 🕷️ 🕸️ 🌞 https://t.co/w6rpWv8rwD pic.twitter.com/gcvalf8mc9

The spider, which can grow as large as a human palm and is identified by its yellow, black, and red coloration, is normally native to East Asia. https://t.co/iRBOVCUYzT

The Joro spider is from Asia is now invading Georgia. Its a large spider known for their spiral, wheel-shaped webs.
There are still a lot of unknowns about the potential impact they could have on ecosystems in their new environment. #Georgia #JoroSpider pic.twitter.com/rog9Tg6hIE

Previous Macron: I Know Aussie PM Lied To Me About Sub Deal
Next Franklin Graham: God Is The Cause Of Climate Change And He Will Soon Murder Everybody Who Rejects Jesus