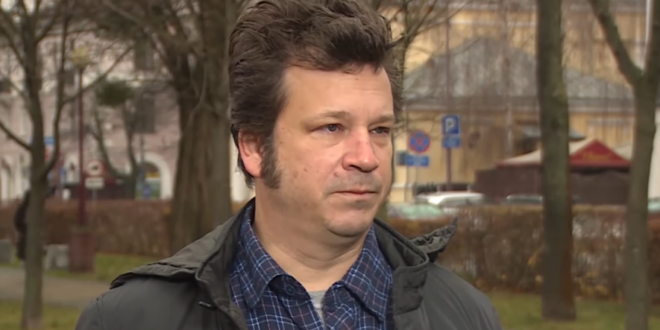 Fugitive Rioter Sucks Up To Putin On Russian State TV

Evan Neumann of Mill Valley, California, who fled to Belarus in order to escape criminal charges for his part in the attempted insurrection on Jan 6, 2021, has given an exclusive interview to Russia’s state media outlet RT.

In his previous appearance, which was on Belarusian state TV, Neuman inferred that Russia was his preferred destination, and Belarus simply happened to be closer. Now this man — on the run from the American justice system — seems to be courting refuge from President Putin.

Neumann is wanted in the United States on six criminal charges related to the Capitol riot, including two felonies for assaulting an officer. The U.S. fugitive’s comments to the notorious state media outlet seem like an attempt to ingratiate himself to the Kremlin and perhaps to land in Moscow at some point in the future.

NEW: Capitol riot suspect/defector Evan Neumann sucks up to Putin, with a self-pity party on Russian TV: “I don’t understand why Russia is our enemy today.” https://t.co/gjgJp93lMb

WANTED! Evan Neumann aka #DrunkedTrashStache is wanted by the FBI. He has been charged in connection with the Capitol Riot and is currently a fugitive from Justice. #CapitolRiot #SeditionHunters #Wanted #wednesdaythought PLEASE RETWEET! pic.twitter.com/rXeLnHq3i5