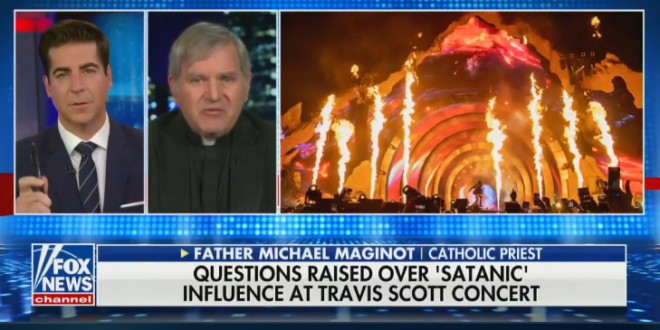 Jesse Watters spoke with Father Michael Maginot and asked him questions like “What signs did you see at that concert that would lead to you believe there was a satanic role?” and “The stage we’re seeing right now, that looks to you like the gates of hell the way that I guess they designed that?”

“It seemed like it wanted you to go to the other side and so it did seem, you’re kind of going down, you know, Dante’s Inferno, various stages of hell,” Maginot said. “People are kind of being induced to push forward not realizing the havoc you could cause.”

Read the full article. QAnon crazies, unsurprisingly, have been pushing similar claims ever since the concert. Watters, not incidentally, has praised QAnon as “uncovering lots of great stuff.” In the piece linked below, the Daily Caller interviews “top exorcists.” Really.

The ritual at Astroworld Fest happened 666 months 6 days after the founding of the Church of Satan (incidentally Travis Scott’s birthday) and right after Drake made a surprise appearance. Travis Scott & Drake were born 66 months 6 days apart. pic.twitter.com/Q2JbYNynel

I interviewed top exorcists and demonologists who broke down what they saw in the aftermath of Travis Scott’s tragic Astroworld Festival. “People don’t realize they are playing with ‘fire’ when they start summoning Satan.” https://t.co/EXPLrI5Tnr

Previous BOOK: Mnuchin And Pompeo Discussed Removing Trump Via 25th Amendment After Capitol Riot [Video]
Next Carlson: Kamala Harris Is “Not From This Country”